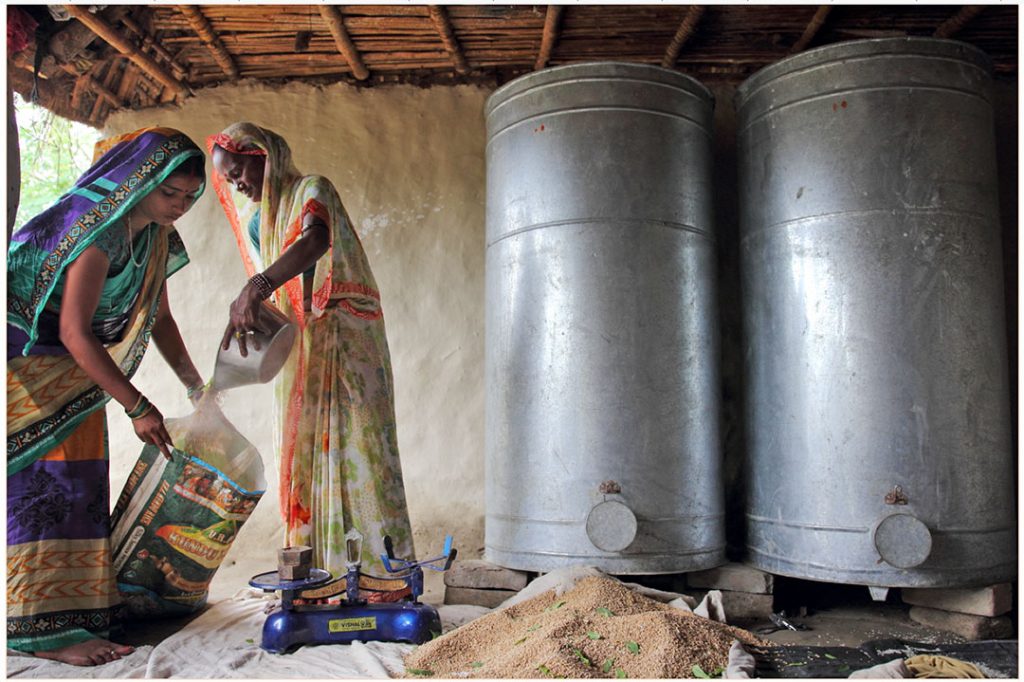 Northern Bihar remains in a geographically vulnerable position as it lies amidst Kosi river basins. The Kosi Basin is prone to frequent flooding. In earlier times the silt load from Nepal was brought by the river keeping the floodplains clean and fertile but the artificial embankment and dam construction changed this pattern leading to piling of silt and excessive water depth. Over a period of time, the course of the river has also changed and therefore the old river beds are now dry. Increase in the siltation means the water already has less natural seepage; a problem compounded by unplanned development. Saharsa faces excessive flooding due to water depth and soil texture.

The massive Kosi floods of 2008 were an example of the devastating impact of floods in this area. The changing climatic conditions are wreaking havoc on poor vulnerable communities. The loss of agricultural land and limited livelihood options manifest in food insecurity. The multi-faceted problems require a pre-emptive approach of disaster management and relief measures. The approach addresses emergency response, early warning systems through community participation 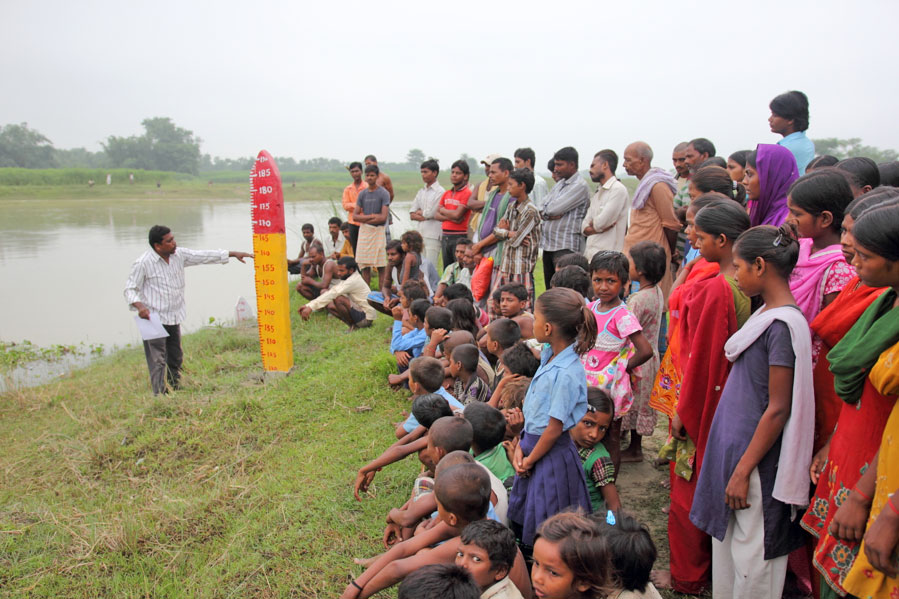 About the Coping and Adaptation Strategy

The project was able to achieve following outcomes at the end of the first project cycle.

Saharsa region faces extreme social, economic and ecological challenges as a consequence of frequent flooding. The solutions proposed for the interventions were integrated and were instrumental in strengthening the eco systems such that it provided livelihood, food and water security as well as established mechanisms, which improved their capabilities to respond to disasters. Emergency warning through installing warning poles, would help them to monitor easily and take appropriate actions to evacuate to the safer locations. The grain banks, which were established, helped to ensure that there was enough food available with the community during the event of disasters and the whole hamlet could survive. Thirdly, more than 500 farmers were trained on alternative cropping method, which would improve their earnings, even during the extreme weather conditions.  The creation of natural buffers through bioshield nurseries can help reduce the velocity of the water. Since the solutions were locally based, the communities could easily adapt to such measures and adapt to change.

Simple early warning systems set up for easy implementation, comprehension and monitoring at the local level. Systems comprise of water gauges and flag warnings that show different levels during an emergency. Water gauges have been installed in several low-lying areas. These locations where water levels can be accurately recorded were decided with GPS support. Consistently monitored, the gauges are marked with three colours. The white pole is in the water and marks up to 120 meters. The pole with yellow and red markings is placed on the riverbed close to the water; marking up to 190 meters. These three colours correspond with the flags that are raised to inform the community of the action they need to take at that time. The white flag (level 01) indicates to the community that they need to be on alert. The yellow flag (level 02) is a sign to gather important possessions and be ready to evacuate. The red flag (level 03) is the call for immediate evacuation to a higher plain. A full evacuation demonstration was done for the first time after the last alert in Bihar in July 2014 where the community moved out with all of their clothes, utensils, livestock and other belongings. Early warning boards have been placed at a widely visible location in each of the ten hamlets and outside the Panchayat office.

The community disaster resilience fund (CDRF) is a contributory little ‘savings bank’ within each of the ten hamlets. The money itself is contributed by each family in each village on a monthly basis. This money is also being generated through different parts of the project, including the banana and bamboo nurseries. The money that is collected is used to handle emergencies in a more efficient manner; including procuring first aid materials. Group insurance cover was introduced for 400 farmers; 50 families benefitted from livestock insurance for cows and buffalos; and another 88 were given life insurance.

A bioshield element to the project is helping communities protect themselves against inundation. Over 2.5 acres of bamboo buffers and 8.5 acres of banana buffers have already been planted. Popular species of bamboo and banana plants were used as well as low-cost and appropriate technology. With inputs from the Bihar Agriculture University, Sabour, Bhagalpur, bamboo and banana nurseries have also been established.

Nurseries for bamboo and banana plants are helping communities link ecological protection with an eco-friendly livelihood model. Seven bamboo and seven banana nurseries have been established across the intervention area. The nurseries are run by community members who have been identified by the DMC. The banana saplings cost in the range of Rs. 15-20; and the bamboo saplings are sold in the range of Rs. 70-75. The seeds are complemented with organic farming practices, based on compost and free from harmful chemicals. Based on scientific knowledge of local experts and in consultation with the DMCC, appropriate vegetables and techniques were selected. This includes chilly, cabbage, cauliflower, brinjal, ladyfinger and many others.

A community – led multi- tiered disaster management system was established to ensure effective implementation. At the hamlet level, Disaster Management Committees (DMC) was formed with 20 community members each. These DMCs implement the initiatives under the project at their hamlet level. At the panchayat level, a disaster management coordination committee (DMCC) was formed to encourage the community to monitor and make project decisions themselves. One member of each of the ten DMCs is a representative of the DMCC. In the long run, the DMCC can independently advocate DRR concerns of their area with multiple stakeholders. The SEEDS project team’s main role was to therefore facilitate and enhance capacity.

How does it Reduces Climate Risk or Vulnerability and what co-benefits does it Generate?

Early warning boards help ensure that the information stays alive in people’s consciousness, even during peacetime, so that the behaviour becomes a habit. With the introduction of the alternative short-term crop technique, the fertility of the soil is replenished. Bamboo and banana trees are useful in multiple ways for the villagers Moreover, solutions such as Bio shields through plantations on the river bank have helped to save the river bank erosion in these areas. Aside from being a buffer, they are also widely used to build boats, especially during floods. Considering the small size of most farmer’s fields, this is also a great way to increase yield; leading to greater food security. Insurance support can help deal with the contingencies faced almost annually in terms of loss of lives, livestock and crops. Linking with the government and insurance companies, the risk to major livelihoods in the area was minimised. Similarly, grain banks help them to ensure that the food is available at least for first 72 hours.

Women leadership have fostered in these areas post intervention especially in these areas. Women have not only participated in activities but have taken collective responsibility to run the grain banks in their communities. Besides, female youth have been trained as task force members for First aid and Search and Rescue. Along with these women farmers have also participated in the trainings. At the local community workshops, almost 60% to 70% of women have participated and have forwarded their opinion and have taken key role in decision-making processes.

A Practical Approach for Capacity and Resilience Building

The project ensured not only community participation, but also helped them to take initiatives in their hamlet. The representatives of each hamlet also took initiative of selecting those farmers and youth who had potential to understand and disseminate the knowledge on disaster risks, mitigation and adaptation. Having involved them in the process, ensured ownership of these communities to the measures that were suggested. Also since there was huge component related to livelihood, it had more potential of sustaining by itself.  Since the solutions were locally based, the communities could easily adapt to such measures and adapt to change.

Within a span of 18 months, the project was able to foster leadership amongst these most vulnerable communities, especially women and farmers to take appropriate actions that would help them to adapt to changing climate or extreme weather conditions. The most exciting aspect of this was the involvement of women in addressing the issues of food and livelihood security. There was an issue of gender imbalance and often women were neglected. The project gave equal opportunity to these women to take appropriate decisions.

The major challenge is that some of the project activities could not be strengthened further. Disaster Management and adaptive capacities can only be strengthened with sustained efforts and over a period of time. Additionally, the local government have a narrow mandate and therefore their involvement and institutionalized the process is a biggest challenge.

At the local level, the eco systems are getting fragile due to extreme weather patterns and frequent event of disasters. The lesson learnt is therefore to build resilience of these communities, the solutions should be provided which are integrated and are offering resolutions for strengthening their existing eco systems rather than bringing in a complex solution which cannot be sustained for long. Also, since these communities are marginalized and economically weaker, cost effective solutions work effectively. 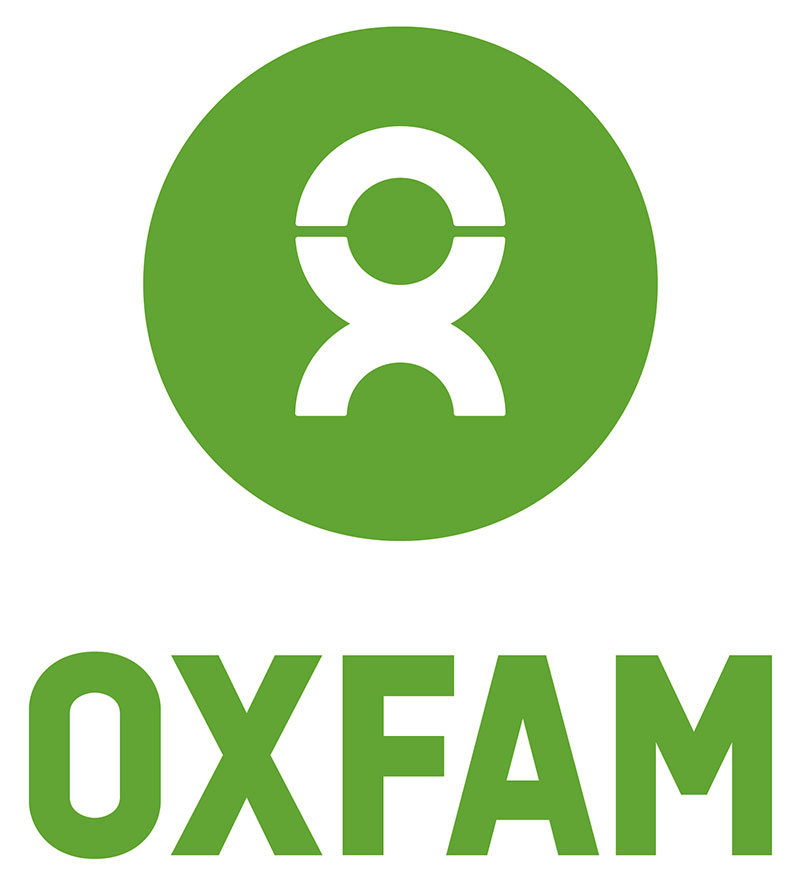