Lobbying and Accounting at CBA8

The second day of the Eighth Instalment of the International Conference on Community Based Adaptation in Kathmandu, Nepal entailed a series of sessions including those that emphasised the importance of engaging the private sector for financing for local adaptation, accounting for natural capital in CBA, financing adaptation in the LDCs and an out-of-the-box experiential lobbying among those scheduled for the day.

The session on Accounting for Natural Capital in CBA, facilitated by Hannah Ried from IIED explored Ecosystem Based Adaptation or EBA using examples from Thailand, Nepal, South Africa and Latin America.

“Ecosystem Based Adaptation is the use of biodiversity and ecosystem services as part of an adaptation strategy with a focus on conservation of biodiversity,” said Judy Oglethorpe from WWF Nepal Hariyo Ban Programme. She went on to say that it was important to have an integrated approach so ecosystems could be helped to adapt to climate change as opposed to a linear approach to adaptation.

Oglethorpe also pointed out that one of the main tragedies arose from there not being a market value placed on ecosystems and would be undervalued if a value has not being marked.

“Thirty-five per cent of Nepal’s Community Forest User Groups’ funds is channelled towards the poor and vulnerable. There are many lessons to be derived from Community Based Resource Management, one of which includes the empowerment of local communities.”

Highlighting the impact of the Thailand floods in 2011, Muanpong Juntopas from Asia Foundation emphasised on the role of the media in disseminating digestible and easy reading material for the general masses and the importance of defining and setting standards for common assets by the Government and the community.

The out-of-the-box session on ‘Experiential Lobbying’ facilitated by Bettina Koelle from Red Cross, Peter With of Southern Voices and CANSA Policy and Advocacy Co-ordinator Vositha Wijenayake focused on presenting a practical approach towards ‘diplomatic’ lobbying strategies with all stakeholders.

As part of the ‘out-of-the-box’ session Koelle pointed out seven key steps that become important when lobbying. They are:

Speaking on advocacy and handling media personnel was CANSA Policy and Advocacy Co-ordinator Vositha Wijenayake. She commented on the importance of maintaining a good rapport with media houses, not only for promotion of the civil society organisation but also to reaching out to the critical masses of society that require basic climate change education. A synopsis of her presentation is as follows:

More information is available on the Southern Voices website that has published a toolkit for communications. 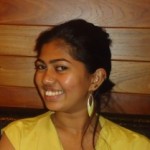 Senashia Ekanayake is a writer, an advocate of Arts, Education and climate change activist. She read for her degree in English, dabbled in the corporate world and is now involved with CANSA Communications. – See more at: https://www.cansouthasia.net/a/India/events_information.php?id=50&title=lobbying-and-accounting-at-cba8#sthash.NBpKyLnU.dpuf