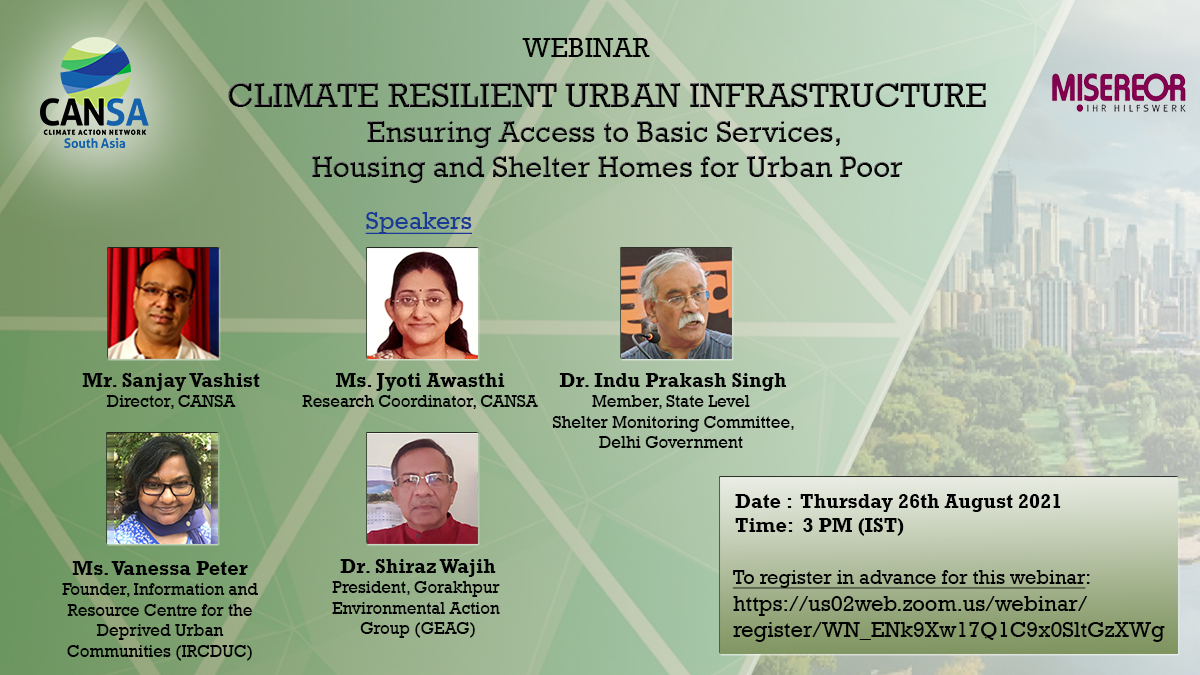 The webinar Climate Resilient Cities – Ensuring Access to basic services, housing and shelter Homes, is the first of four webinars touching upon various aspects of lives of the urban poor, their vulnerability to climate change and ways to build resilience.

The theme of this first webinar addresses infrastructure and access to basic services in urban centres of India, which has always been a matter of concern for urban poor. Poverty ghettos within the cities and in periphery that remain largely unserved, poor roads and pavements, open drainage, lack of adequate housing and shelters for homeless people and families – all this has been a long-standing challenge for urban poor. While a lot of progressive steps are being taken by the governments across the world to build climate resilience in the development framework, the impact of climate change on urban poor remains least understood and articulated. This webinar is an attempt to address this.

Mr. Sanjay Vashist started by talking about the recent IPCC report’s verdict on climate change. He mentioned humans have caused unprecedented irreversible change to climate. Also, humanity through its actions or lack of actions has unequivocally overheated the planet. He talked about IPCC on cities that intensify human induced warming locally. Urbanisation together with more frequent heat extremes will increase severity of heat waves and also increase mean and heavy precipitation over and downward of cities and resulting runoff intensity. In coastal cities, the combination of more frequent extreme sea- level events and extreme rainfall events will make flooding more probable.

Ms. Jyoti Awasthi explained that the webinar was about understanding how the urban poor are becoming victims of the climate change situation or climate impacts, and how we as civil society act together in solidarity with the urban poor to ask the government to look into aspects where urban development is not just about smart cities but about caring cities. They have to be caring for people who make it and who discount our lives in urban centres. We live our life conveniently because we have several people working for us. So they are subsidising our lives. Let us start comprehending and articulating the issues of urban poor as victims of climate change.

Ms. Vanessa Peter talked about Chennai facing destructive floods in December 2015. The city witnessed one of the most massive eviction drives carried out in the guise of conservation of water bodies and providing disaster resilient housing for the vulnerable communities. She talked about her work of enabling access to information on laws, policies and schemes and facilitating community action asserting their rights, establishing community resource and information hubs in informal and low-income settlements to ensure increased access to schemes and services. She mentioned how the Information and Resource Centre for Deprived Urban Communities has engaged in various advocacy initiatives to highlight the issues related to post-disaster displacement through its report. TNSCB in its response to this report has pointed out that it will not be constructing a mass housing project and that efforts are being taken to identify lands within Chennai city in coordination with various departments of the government. Vanessa concluded by saying all conservation and restoration programs and processes should include the active participation of poor and marginalised communities. They should be seen as contributors to the process, and not targeted and discriminated against because of their poverty.

Dr. Shiraz Wajih said if we are talking about the poor people we will have to think that the blue and green infrastructure is becoming so crucial. Environment of the city or around the city is becoming important in terms of climate resilience that the infrastructure will have to be conserved in the form of blue and green infrastructure, which will be beneficial to the marginalised communities and poor people. If you talk of the people who are dependent on the natural ecosystem in various forms, there is a good inter complementarity. If we talk about the climate change resilience or environment the city is much beyond that and peri urban spaces are becoming crucial in terms of the resilience which is provided to the cities. On one hand the Peri urban spaces or the city ecosystems they provide sustainability to the city, urban resilience to the city, or the flood buffers to the city like Gorakhpur.

Recommendations for a resilient city by the panellists:

Recording of the webinar link :
https://us02web.zoom.us/rec/share/wmlfKQmI06FaIlDzhKtcsQOA9XeJ-gEnFvuoQ6wxCQpaAvLyLTXpf-msJGYLwWlu.bVBGsC1kj938oykv