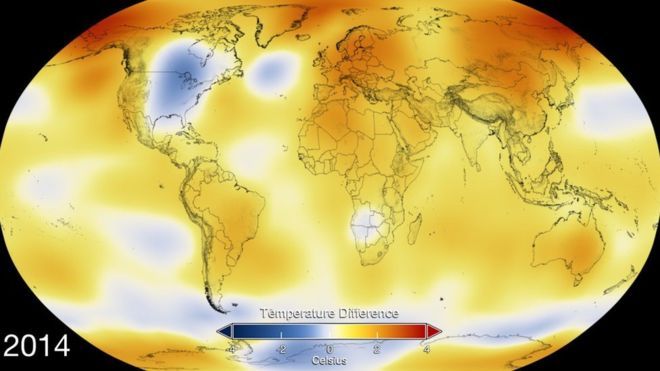 Global temperatures are set to rise more than one degree above pre-industrial levels according to the UK’s Met Office.

Figures from January to September this year are already 1.02C above the average between 1850 and 1900. If temperatures remain as predicted, 2015 will be the first year to breach this key threshold. The world would then be half way towards 2C, the gateway to dangerous warming. The new data is certain to add urgency to political negotiations in Paris later this month aimed at securing a new global climate treaty.

For researchers, confusion about the true level of temperatures in the 1750s, when the industrial revolution began and fossil fuels became widely used, means that  an accurate assessment of the amount the world has warmed since then is very difficult.

To get over this problem, the Met Office use an average of the temperatures recorded between 1850 and 1900, which they argue makes their analysis more accurate.

Their latest temperature information comes from a dataset jointly run by the Met Office and the Climatic Research Unit at the University of East Anglia.The HadCRUT database showed that in the first nine months of this year, the global mean temperature had just gone above 1C, hitting 1.02 with a error factor of plus  or minus 0.11C.

Scientists say that the one degree mark will be broken in 2015 because of a combination of carbon emissions and the impact of the El Nino weather phenomenon. “We have seen a strong El Nino develop in the Tropical Pacific this year and that will have had some impact on this year’s global temperature,” said Stephen Belcher, director of the Met Office Hadley Centre.

“We’ve had similar natural events in the past, yet this is the first time we’re set to reach the 1C marker and it’s clear that it is human influence driving our  modern climate into uncharted territory.” In 2013, the Intergovernmental Panel on Climate Change reported that the combined land and ocean temperature showed warming of 0.85C between 1880 and 2012. They also noted that the difference in the average temperatures from the 1850 to 1900 period was 0.78C when compared to the average between 2003 and 2012.

Since 2013, warming of the oceans and land surfaces has reached new heights. The year 2014 went down as the warmest year since records began, but it is likely that 2015 will go beyond that level. Scientists believe that 2016 is also shaping up as a very warm year and they expect that the one degree margin will become more firmly established in the coming years.

“This year marks an important first but that doesn’t necessarily mean every year from now on will be a degree or more above pre-industrial levels, as natural variability will still play a role in determining the temperature in any given year,” said Peter Stott, head of climate monitoring and attribution, at the Met Office.

“As the world continues to warm in the coming decades, however, we will see more and more years passing the one degree marker – eventually it will become the norm.”

Other researchers in the field say that while the 1C threshold is significant, the overall direction of travel is far more important.”What matters is this background warming that continues up,” said Prof Miles Allen from the University of Oxford. “And whether we have a wobble that takes us to 1.02 or 0.99, ok it matters in a sporting event, but it doesn’t really matter in terms of global mean temperature.”

The development is likely to increase pressure on politicians to reach a decisive agreement at the UN climate conference in Paris later this month. After the failure of the Copenhagen meeting in 2009, political leaders agreed the following year in Cancun that two degrees of warming would be the agreed mark beyond which temperatures should not rise.

Many island states disagree with the two degree goal and want the UN to adopt a lower threshold of 1.5C. A UN analysis of the carbon cutting plans put forward by nations ahead of the Paris meeting concluded that, taken together, they would lead to warming of 2.7C above pre-industrial levels.

UK Energy and Climate Secretary Amber Rudd says the latest findings from the Met Office underline the need for a deal in Paris. “Pledges to reduce emissions made by countries so far represent a significant commitment but that’s just the beginning,” she said in a statement. “We need to ensure that as the costs of clean energy fall, countries can be more ambitious with their climate targets.”

A brief history of two degrees

The idea of a dangerous warming threshold was first mentioned by Yale economist William Nordhaus in the 1970s. In 1990, the Stockholm Environmental Institute came forward with a more definitive statement that 2C should be taken as the level at which dangerous warming would occur.

However politicians meeting at the Rio summit in 1992 refused to explicitly adopt the target. The first political body to declare that 2C was the goal, was the 1996 European Council of environment ministers, which included a young Angela Merkel as the German representative.

The main UN bodies though were wary of including the target despite the urging of scientists, and it took climate negotiators until 2010 in Cancun to commit their governments to “hold the increase in global average temperatures below 2C above pre-industrial levels.”