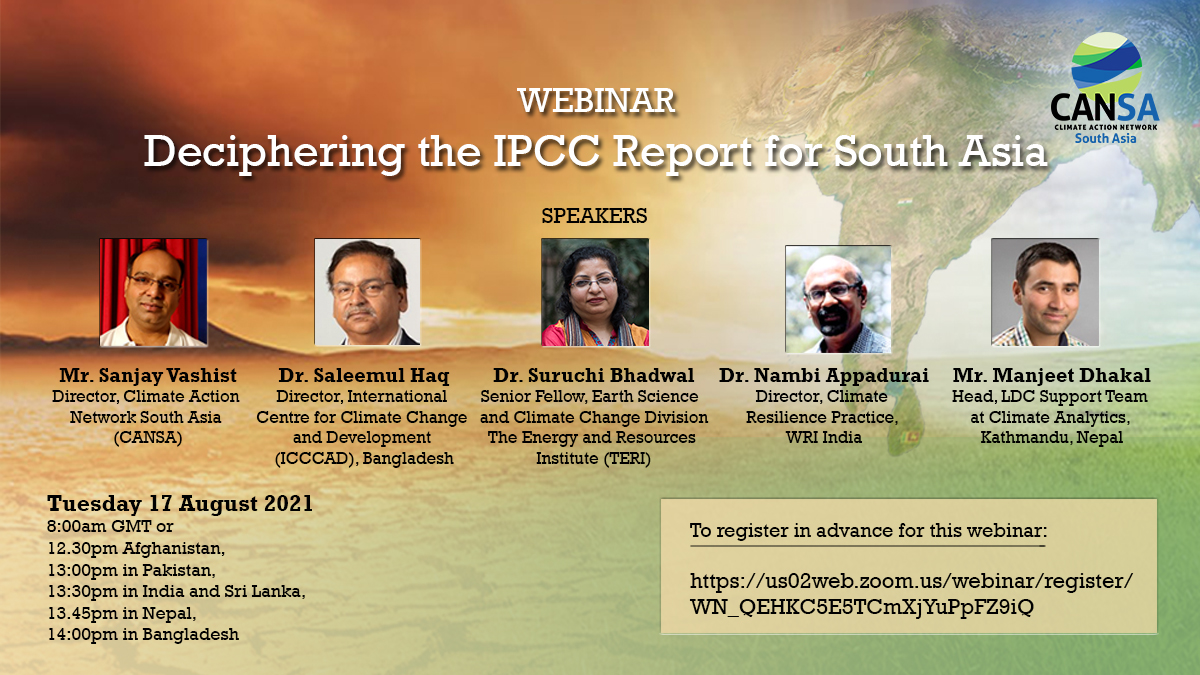 A Report on the Webinar: Deciphering the IPCC Report 2021 for South Asia

The IPCC Assessment Report 6 of the Working Group 1 on the physical science basis was released on 9 August 2021. The report is more than 1300 pages with a summary for policymakers, an interactive atlas, regional factsheet, FAQs, etc., could be difficult to decipher. The webinar “Deciphering the IPCC Report 2021 for South Asia” organised by CANSA, was held on 17 August 2021, to explain the new findings on climate science and what it means for South Asia.

The 90 minutes discussion opened with Sanjay Vashist, Director, Climate Action Network South Asia (CANSA) setting the context for the webinar and introducing the IPCC as a global body, its working groups, the recently released Sixth IPCC Assessment Report 2021, and how it is different from the previous five assessment reports. He touched upon terms such as Kyoto Protocol, Mitigation and Adaptation with respect to climate change, and the Paris Agreement all of which have now become part of common parlance. The Sixth Assessment Report is about a global stocktake he said.  IPCC has been doing commendable work in terms of conveying the forecast through bringing in climate science to the level of increased understanding.

He said that the IPCC Report 2021 is most convincing that the climate change phenomenon is human induced, with micro-level predictions, and clear indications for South Asia with increase in heat waves, flash floods, cyclones, etc. “In the light of the findings of the latest IPCC report, we must hold developed countries accountable, phase out fossil fuels, acknowledge that loss and damage is happening here and now, and integrate climate plans in all our development pathways.”, he said.

Dr Nambi Appadurai, Director, Climate Resilience Practice, WRI India, said that the IPCC Report 2021 is like a Code Red verdict for countries globally with emphasis on urgency in available time windows to act. There is high degree of confidence that extreme events attribution to climate change has become possible. For the first time we have a deep-dive regional assessment for all five continents, and the key takeaways are we are on course to reach 1.5 0C of warming within next 2 decades. There is more than 50% chance that 1.5 0C target is reached or crossed between 2021-2040.

The IPCC Report indications for South Asia were: South Asian monsoon precipitation will be dominated by effects of internal variability, with multiple climate change drivers contributing to increased disasters. Frequent droughts and floods will affect rural communities dependent on agriculture and the urban economy. Cities will experience heat island effects and flooding from heavy precipitation in coastal cities. He emphasised that more investments were needed in resilience building measures propelled by local communities.

Dr Saleemul Haq, Director, International Centre for Climate Change and Development (ICCCAD), Bangladesh, distinguished scientist andlead author of the chapter on Adaptation and Sustainable Development in the third assessment report of the IPCC, said that the scientists who were part of the IPCC working group were a cautious lot.  However, “this time, scientists are ringing the alarm bells now and really hard; they stated unequivocally that climate change is attributable to human-induced activities.”

Dr Haq made an important point that the report needed to be deciphered for those who will be affected. Development should not be compromised, but recommended a low carbon, good development pathway in India and Bangladesh, and other countries, and support for those likely to suffer through adaptation. He ended saying that “At COP26, funds for loss and damage due to climate change should be pushed on the agenda.”

Dr Suruchi Bhadwal, Senior Fellow, Earth Science and Climate Change Division, The Energy and Resources Institute (TERI) has been part of the IPCC working group this year, and this is the 4th term she served with IPCC.

She said thousands of scientists are a part of this IPCC assessment report, and there is always an endeavour on the part of IPCC to make sure that there is increased participation in the report from developing countries. Conscious effort to make sure that there is representation from both developing and developed countries. The scientists have produced policy relevant information and have attempted to not prescribe solutions.

In the last 10-15 years the rains were not so heavy, the subcontinent was not experiencing this before. Governments in South Asia need to prepare and with urgency as we will have wetter and warmer nations in future time periods. A warmer climate means more infectious diseases – environment is going to be far more conducive to disease.

It is a concern that, while climate change impact can be observed on the Hindukush glaciers, there is no system available to see how the 14000+ glaciers of the Hindukush will be impacted, and the consequences to food security, water security, and whole range of other sectors.

Countries have developed state action plans for climate change, however their implementation needs to be focussed upon.

Manjeet Dhakal, Head, LDC Support Team at Climate Analytics, Kathmandu, Nepal, said that even developed countries cannot cope with climate change impacts, so it’s far worse for developing countries. Any temperature beyond 1.5 0C will be difficult for survival in vulnerable countries, so action has to happen now particularly for South Asia.

Any increase in fossil fuel emissions will mean greater intensity and frequency of climate-induced disasters will be seen. Countries using coal will witness higher impact. We cannot say that climate change impacts will be seen in the future. We can see them now – in Nepal, floods and landslides claimed more than 200 lives this year. All these have a direct impact on agriculture.

Mountain countries are at the forefront of climate impacts because of slopes which are unstable, glacial lake outburst flooding will impact not just upstream but also downstream.

He ended with some key takeaway messages: GHG emissions need to be reduced urgently. Countries with limited resources will continue to require financial support for this. Every country has to submit targets to reduce fossil fuel emissions voluntarily and take responsibility. Time was running out.

In the Q&A session, Farah Kabir commented about gender-based violence would increase due to climate change disasters and that we need a human rights charter to ensure social justice.

The concluding remarks were made by Atiq Rahman, Executive Director, Bangladesh Centre for Advanced Studies (BCAS). He said, “The message from the IPCC 6th Assessment report is loud and clear – Industrialised countries must reduce their emissions and developing and least developed countries must integrate action on climate change at every level to be able to achieve the sustainable development goals. We have to integrate and implement climate action on national, sub-national, local and project level, even in our day to day lives from now on.”