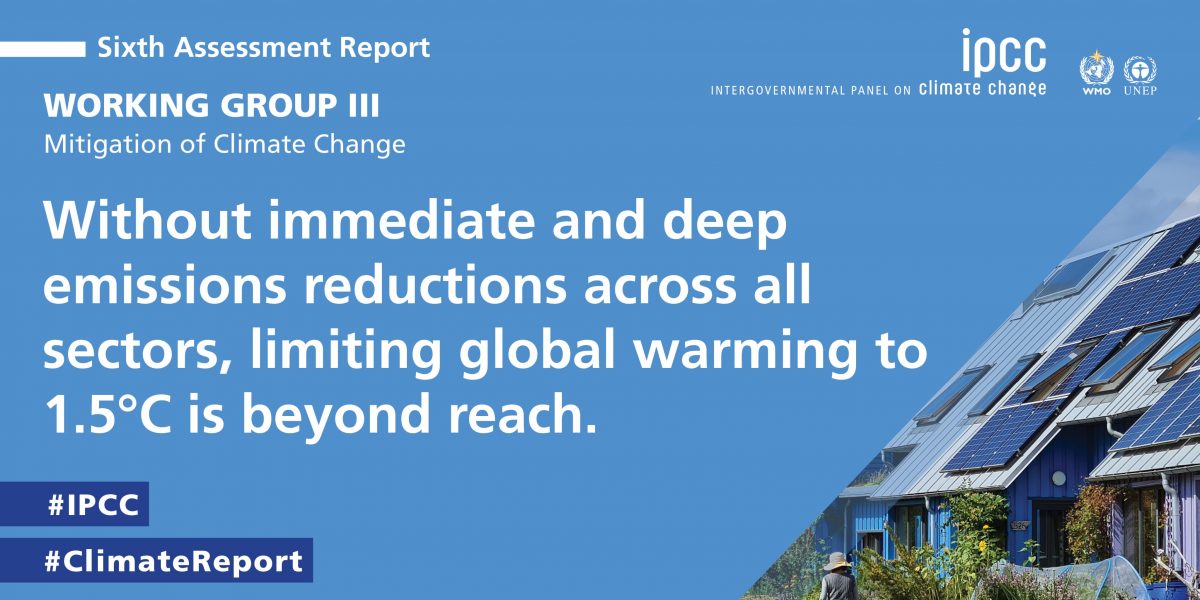 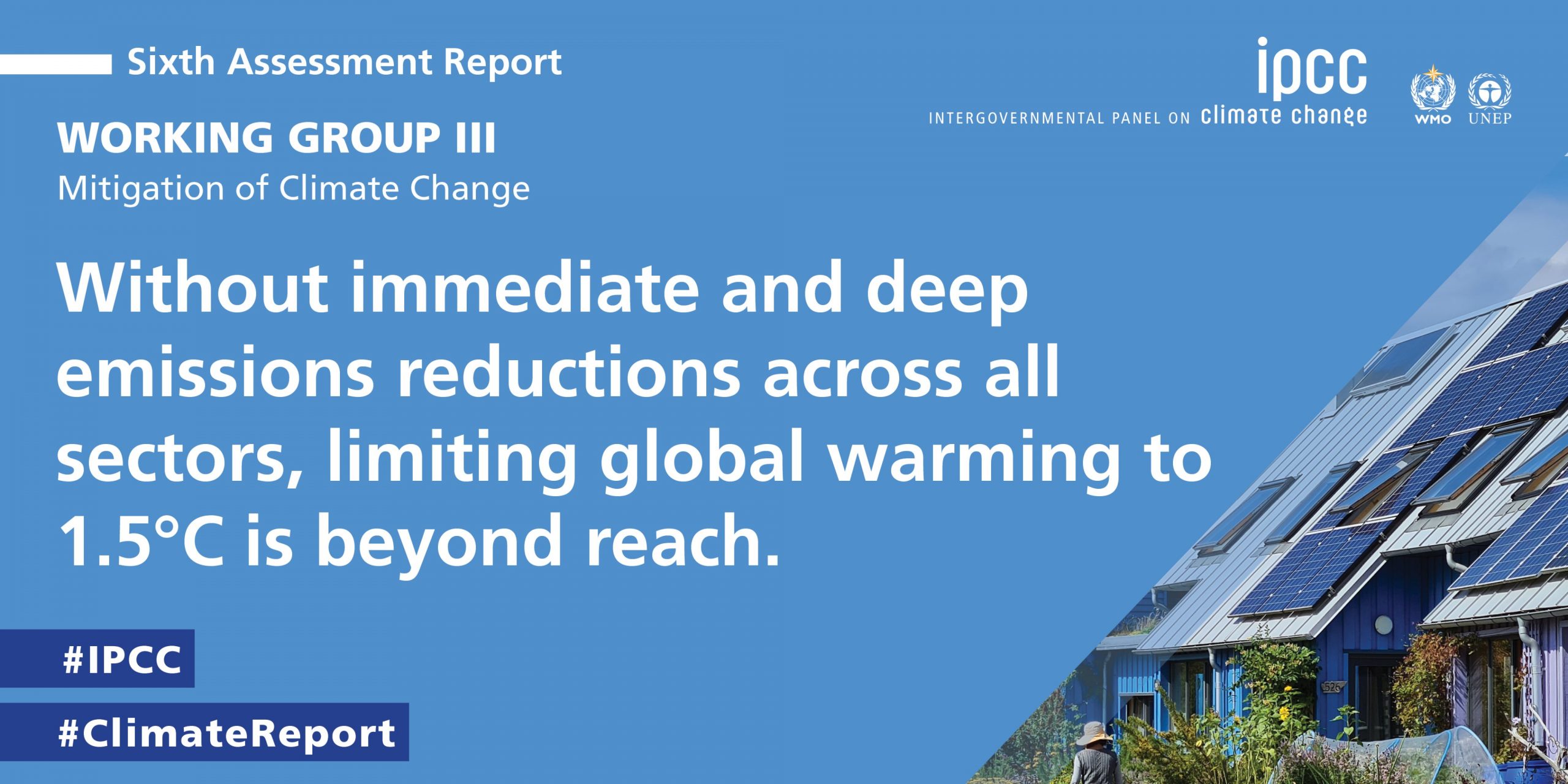 With every fraction of a degree of global warming, climate change impacts will intensify. In the latest instalment of the Inter-government Panel on Climate Change’s (IPCC) Sixth Assessment Report, released on 4 April 2022, 278 scientists from 65 countries find that the world should peak GHG emissions in the next three years to preserve our chances of meeting the Paris Agreement’s 1.5 degrees C target. Coming on the heels of two previous reports focused on the physical science of climate change and its impact, this report from Working Group III concentrates primarily on mitigation, or reducing greenhouse gas (GHG) emissions and removing carbon dioxide (CO 2 ) from the atmosphere.  It also states a very interesting factor that the electric vehicles offer the largest decarbonisation potential for land-based transport.

The Working Group III component of the Intergovernmental Panel on Climate Change Sixth Assessment Report is a powerful document sharing current global discourse on climate change mitigation promises and progress.  A large coastal population, high levels of heat exposure and risk of concurrent flood and drought incidents places India among the countries most vulnerable to climate change. The report identifies large scale displacement, a 11-20% increase in the number of people at risk of hunger, and infrastructural and other losses as some consequences. The IPCC report finds that the impacts of climate change could result in a loss of 2% of GDP in South Asian countries by 2050. Exposure to extreme heat is expected to become more frequent, intense and long-lasting in South Asia, increasing the likelihood of droughts in arid areas.

In the Indus and Ganga river basins, “deadly” heat waves could cross the limits of human survivability, with some regions already experiencing such conditions. By the end of the century, South Asia will be one of the regions hardest hit by heat stress, with outdoor workers seeing the number of “climatically stressful” work days increasing to 250 per year.

The report speaks about the increasing diversity of actors and approaches to mitigation and the close linkage between climate change mitigation, adaptation and development pathways. On the question of agriculture, forestry and other land use (AFOLU) the report states that measures to promote carbon sequestration and reduce the emission of greenhouse gases have both co-benefits and risks in terms of biodiversity, ecology, food and water security, livelihoods and rights, especially land rights of indigenous peoples, local communities and small landowners. Extreme droughts and heatwaves will have negative implications for agricultural income and crop productivity. A large proportion of the 300-odd million people exposed to lower agricultural yields above 1.5º C of warming will be from South Asia.  Sensitivity to temperature changes is quite high; maize production in India, for example, could see decreases of 25% at 1º C and 70% at 4º C.

Modelling predicts much higher rice and wheat prices that will severely impact economic growth. The report stresses the human toll of these effects, linking agricultural losses to suicides. The threats are particularly acute for populations in the Indo-Gangetic Plains, who will grow more dependent on mountain water just as groundwater levels are reaching critical levels and glaciers are melting. Nepal lost a startling 24% of its glacier area in 1980- 2010. The report notes the “conspicuous absence” of transboundary scale adaptation policies in the region to cushion these effects. Cities are projected to grow by up to 90% across the world; a substantial portion of this will take place in India. Yet cities are particularly harsh environments for climate change. Urban heat, for example, affects poorer populations and children disproportionately, particularly in the context of poor infrastructure in South Asia. Besides heat, South and Southeast Asian cities will together account for three-quarters of urban land prone to high frequency flood-risk. South Asia’s many coastal cities are relatively unprotected from sea-level rise, with one of the highest coastal protection deficits in the world. These cities are also threatened by too little water in the form of urban droughts, with Delhi, Karachi and Kolkata being among the most vulnerable. The IPCC report provides ample evidence that Indian women will disproportionately bear the impacts of climate change. Frequent droughts and heatwaves will increase workloads and stress for Indian women. Climate-induced food insecurity in South Asia will result in a host of negative birth outcomes for pregnant mothers – including undernutrition, stunting and childhood mortality. In the Sundarbans, the IPCC report finds that climate-induced soil salinization is burdensome for women responsible for obtaining clean drinking water. While the Report notes that India’s National Action Plan on Climate Change includes climate policies that focus on women, it also finds that the “mere inclusion” of women in national and sub-national planning is insufficient, and that it has not resulted in “substantial gender transformative action”. The report notes that changes to water availability will make India’s energy system less reliable. Of the coal plants currently experiencing water scarcity for five or more months a year, around a sixth are in India; such constraints will increase with higher temperatures. It is also observed that the shortfall in financial flows to meet mitigation goals and speaks about the need to address inequities in access to finance and meet the costs of reducing the impacts of climate change. By underscoring the need to have equity in financing climate justice efforts, the report also promotes the rights of the Global South.

1.Global GHG emissions have continued to rise, but in pathways that limit warming to 1.5
degrees C, they peak before 2025.

In modelled pathways that hold global warming to the Paris Agreement’s 1.5 degree C goal (with no or limited overshoot), GHG emissions peak before 2025 and then fall by 43% from 2019 levels by 2030

3.We need rapid transformations across all systems to avoid the worst climate impacts.

If well-designed and effectively implemented, many of these mitigation strategies can generate critical co-benefits for sustainable development. Conserving natural landscapes, for example, can support nearby households’ livelihoods, bolster food and water security, and protect biodiversity.

4.Changes in lifestyle and behaviours have a significant role to play in mitigating climate
change.

5.Limiting global temperature rise to 1.5 degrees C will be impossible without carbon
removal.

These approaches can include both natural solutions, such as sequestering and storing carbon in trees and soil, as well as technologies that pull CO 2  directly out of the atmosphere. In the near-term, restoring natural carbon sinks like forests is a relatively cost-effective, readily available carbon removal approach that, when implemented appropriately, can deliver a wide range of benefits to nearby communities.

6.Climate finance for mitigation must be 3 to 6 times higher by 2030 to limit warming to
below 2 degrees C.

This misalignment of global capital has resulted in a substantial shortfall between current levels of climate finance and those needed to mitigate climate change, which persists across all regions and all sectors. This gap is widest in developing countries, particularly those already struggling with debt, poor credit ratings and economic burdens from the COVID-19 pandemic.  Recent mitigation investments, for example, need to increase by at least five-fold in Southeast Asia and developing countries in the Pacific, seven-fold in Africa and 12- fold in the Middle East by 2030 to hold warming below 2 degrees C.