An Equitable Phase Out of Fossil Fuels: A civil society equity review 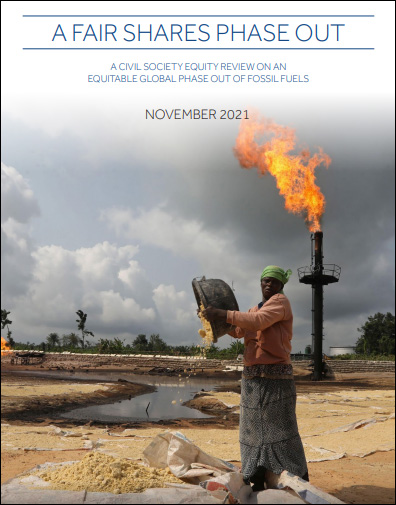 The past 3 decades since the UNFCCC negotiations began, we have not tried to mitigate GHG emissions despite clear warnings. As a result the climate crisis is hitting the most vulnerable people in the Global South first and hardest. We now all face the reality of climate change – an existential threat on par with weapons of mass destruction and nuclear war.
This report provides a sharp, much-needed focus on the main cause of our existential crisis – fossil fuel production. Rather than lofty emissions reduction targets decades in the future, this report focuses on the need to immediately stop the expansion of fossil fuel extraction and use, and on how a rapid phase out of existing production can be undertaken in an equitable manner. This report features thirteen country profiles (India from the South Asian region) to demonstrate the diversity of challenges and opportunities in addressing fossil fuel production at the national as well as international level, and highlights real world challenges and opportunities playing out in these countries. It presents an initial framework for addressing “supply-side equity” issues relating to the phaseout of fossil fuel extraction, as well as a number of possible solutions including both national and international interventions.
Building on previous CSO Equity Review reports, it also includes an updated equity assessment of NDCs demonstrating how current pledges for climate action remain deeply inadequate and unjust.

This is a systemic crisis with fossil fuels at its core
This report starts with recognition that the climate emergency must be understood as a crisis intertwined with myriad other crises. It is an expression of long-standing structural injustices, exacerbated on a daily basis by elites and a wealthy minority of the world’s population, and is a direct result of historical pollution compounded by decades of deliberate delaying tactics by the fossil fuel industry. The crisis is here and now. Every fraction of a degree increases the risks of crossing irreversible tipping points that may unleash cascading impacts. Greenhouse gas emissions, and hence, their primary source – fossil fuel production – must be phased out as rapidly as humanly possible if we are to avoid catastrophic damage to the climate system, nature and society.

A systemic crisis requires a systemic change
Measures to address today’s crisis must be far-reaching and drive systemic changes in the way our societies and economies function. The climate crisis can only be successfully tackled by ensuring and enabling a globally just transition. We must also address underlying structural inequities relating to trade,
international debt, and the perverse fact that overall financial flows in the order of USD 2 trillion per year pass from the Global South to the Global North. Decent work, quality jobs, well-being, sufficiency and equity must guide the transition to a fossil fuel-free future.

Countries’ NDCs
We have assessed countries’ NDCs against their ‘fair share’ of the global mitigation effort needed to transition to an emissions pathway that preserves a chance of limiting warming to 1.5°C. In general, countries’ mitigation pledges are inadequate. We need more than three times as much mitigation as currently planned to get us onto a 1.5°C pathway by 2030. While the very wealthiest countries (US, UK, EU, Japan) remain consistently far-below contributing their fair shares of the global effort, in
fact, some less wealthy countries (China, India, South Africa, Kenya) have mitigation pledges reaching about — or above — their full fair shares, although others fall short. Unless all countries markedly increase their domestic emissions reductions and a future within 1.5°C will remain out of reach. For
wealthier countries this also means dramatically increasing flows of international financial and technological resources to less wealthy countries. And for less wealthy countries this means emissions reductions in excess of their own fair share that are internationally supported and financed by wealthy
countries.