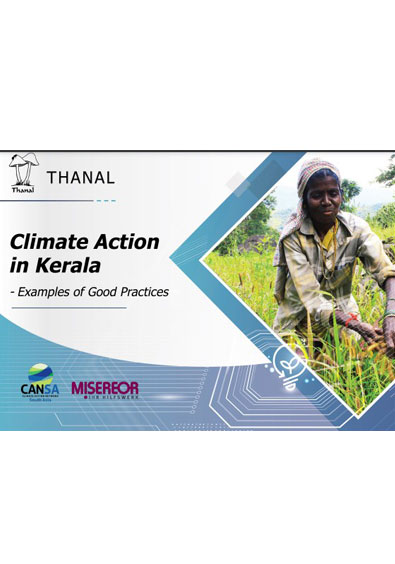 Of all the states in the country, Kerala has to be particularly vigilant against the potential harmful impacts of climate change. Yet, there have been excellent initiatives, some of them were facilitated by NGOs like Thanal and some of them pushed with far-sight by public agencies like KSEBL, ANERT, Cochin International Airport and the Transport Department. There are also interesting ventures by Haritha Kerala Mission which works with Local Governments. These examples of good practices which lie scattered in different domains and different agencies have been brought together by Thanal in this excellent compendium “Climate Action in Kerala”.

The state of Kerala is at the forefront of climate action, with a great number of innovative, replicable, inclusive and sustainable climate change mitigation, adaptation and disaster risk reduction projects. As a narrow coastal state surrounded by the Arabian Sea in the west and the towering Western Ghats in the east, Kerala is highly vulnerable to the adverse impacts of human-induced climate change such as rising sea levels, floods, droughts, landslides, storm surges and cyclones. Numerous initiatives by the state government as well as civic society organizations and individuals address the global crisis of climate change, especially after the devastating tropical cyclones, floods and landslides occurring since 2017.

This report comprises eighteen good climate practices in Kerala which spans across various sectors such as Energy, Transportation, Agriculture, Oceans and Coastal Ecosystems, Water Resources, Waste, Afforestation, Health and Cross-cutting. All the practices incorporated in this report either focus on climate mitigation, adaptation or resilience. Some of the projects have already been implemented and shown positive results while others are either in the implementation or proposed state. The examples do not reflect on the entirety of the projects but provide a snapshot of these sustainable projects that can be replicated elsewhere