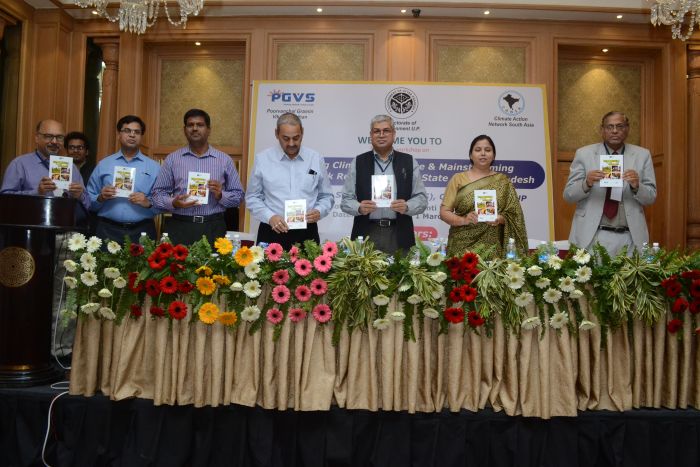 While inaugurating the workshop Shri Alok Ranjan, Chief Secretary, Uttar Pradesh said “Climate change poses immense challenges and it is essential that we bring in drastic changes in our thought and lifestyle to meet them. Climate change resilience strategies needs to be mainstreamed into the development agenda of the state. Additionally state should take extensive measures in 7 missions identified by state action plan on climate change”.

“The impacts of climate change are visible all over the world. Robust climate change resilience and disaster risk reduction strategies are lacking in the state of Uttar Pradesh. Thus the above strategies need to be mainstreamed into development planning and implementation” said Prof. Vinod Menon, Founder Member, National Disaster Management Authority.

Illiteracy and inherent inability to utilize technology in farming and generating livelihood are the main reasons behind widespread poverty of the state. Additionally inadequate healthcare facilities and unplanned urbanization have exacerbated the situation. These have caused lopsided development in the state without rationalizing growth needs and sustainability. Analysis of scientific data indicates that precipitation in the state is slated to rise by 15-20% and temperature by 2.70C. This will lead to widespread loss and damage in agricultural sector.

“Collective effort, both at central and state level, is needed in order to build climate resilience. Better governance, robust institutions and their commitment will drive resilience. Indigenous technology and traditional knowledge should to be properly documented. Resilience and disaster risk reduction measures need to be identified and properly implemented. Long term planning and swift response to disasters need to be integrated in disaster risk reduction” said Dr. Bhanu Mall, Secretary, PGVS.

In the workshop, a report was submitted to state government and to Chief Secretary, Uttar Pradesh. Shri Javed Usmani, released a circular which obligates departments of state government to mainstream DRR in their planning activities and to earmark 10% of budget for its implementation. It is also suggested that the action plan adopted by various departments of state government will be studied. Furthermore it is suggested that non government organisations, academicians, media, scientists, technical experts, representatives of Panchayats and local bodies, MPs and MLAs should also be included in a drive to aware masses and attain the goal of climate change adaptation and sustainable development.

Dr. S. Satpathy, Director of Climate Change Division, Ministry of Environment, Forest and Climate Change said “Work is under progress to add 3 more missions into the existing 8 missions of national action plan on climate change. State governments should submit detailed action plan to deal with climate change to the environment ministry. It would be extremely useful to prepare inter-departmental communication plan to bring in convergence of various activities.

(Climate Action Network South Asia (CANSA) is a coalition of 143 civil society organisations from 7 South Asian countries promoting equity and sustainable development in the design and development of an effective global strategy to reduce greenhouse gas emissions and ensure its implementation. For more information visit www.cansouthasia.net)