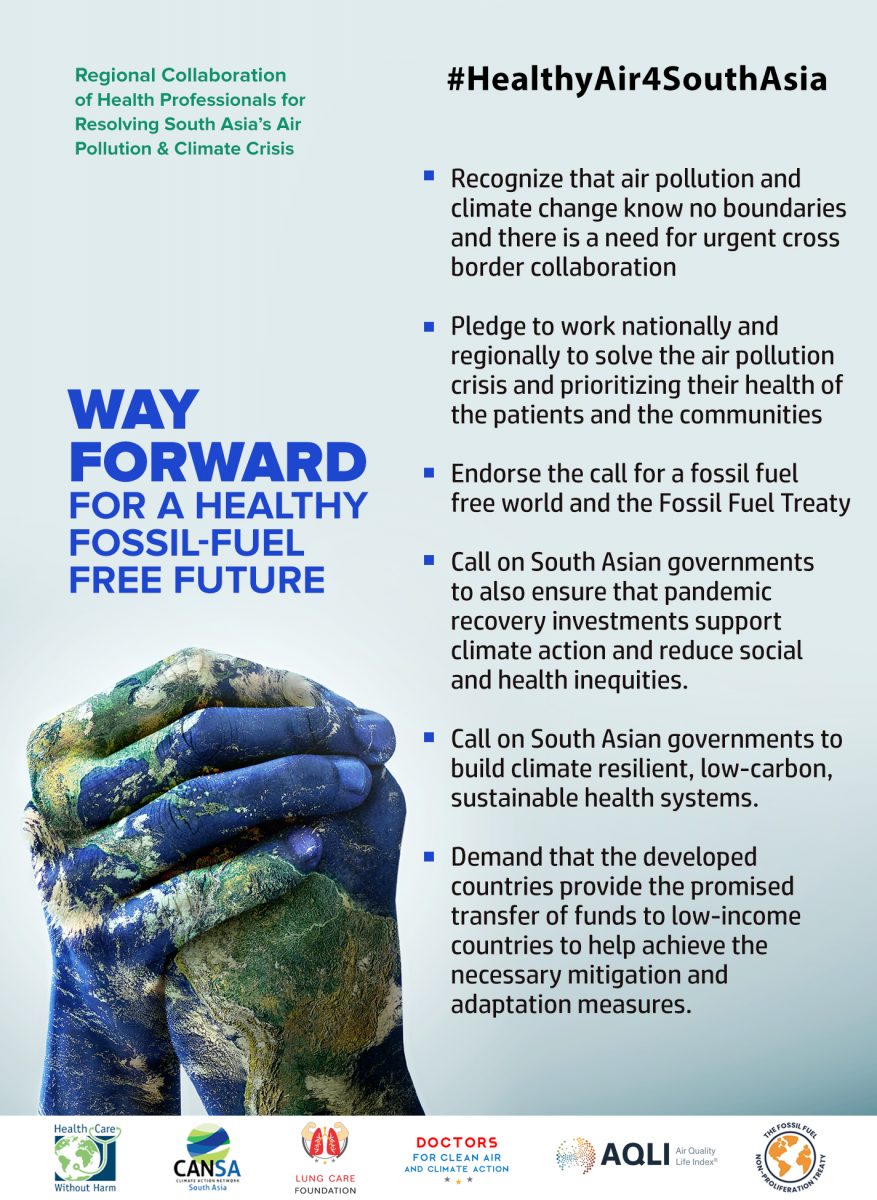 The webinar was moderated by Shweta Narayan from Health Care Without Harm.

It is well established that fossil fuels – coal, oil and gas – are major drivers of climate change and have a direct impact on our health. Burning fossil fuel causes air pollution and releases toxins that can lead to early death, heart attacks, respiratory disorders, stroke, exacerbation of asthma, and absenteeism at school and work. Out of the top 50 cities in the world with poorest air quality in 2020, 42 are in South Asia. Air Pollution exposure is the second most important risk factor for ill health in South Asia. In the webinar public health and medical experts discussed and explored opportunities and strategies on air pollution, climate and health, for the region and interventions that the public health & medical community could make in transitioning towards a sustainable fossil fuel free future.

Sanjay Vashist introduced the subject of climate change being caused by human activity and interference in the natural ecosystem. As a result, we see higher intensity of its impact in the form of disasters not only in South Asia, but across the world. Climate change is aggravated by air quality. Whatever we build – infrastructure as in the form of bridges or in the form of urban centres, they are all compromised – and lead to the next new normal seasons that hit us. IPCC’s forecast in terms of extreme rainfall or extreme monsoon or extreme heat conditions is the reality now. We can imagine how extreme and more unbearable it will be in future. We can pin climate change or global warming down to six greenhouse gases. Coal mining oil, diesel, gas all emit a lot of greenhouse gases (GHGs) in the atmosphere. The levels of GHGs have gone up to almost 400 ppm already. Fossil fuels are responsible for global warming, and also responsible for local air pollution in many areas. This has certainly cost us a lot. Around 54,000 premature deaths in Delhi in 2020 were as a result of air pollution. It was 1.7 million Indians in 2019 and the economic losses have been around $8 million dollars; that is the price we pay for air pollution that is happening on a regular basis. Like global warming, air-pollution also doesn’t know borders it is across the region in South Asia and requires huge collaborative effort. Air-quality index refused to measure beyond 999 which is the highest limit – it doesn’t show data beyond that unfortunately. For this, fossil fuels need to be phased out as soon as possible and public transport needs to be encouraged in South Asia. A collaborative approach of exchanging data between different countries is important because that leads to addressing the problem in a more comprehensive manner rather than within a national boundary in a very cosmetic manner.

Dr Arvind Kumar started by explaining what is climate change and declared that climate change is the biggest global health threat of the 21st century. The current unexpected health impacts of climate change include injury, illness or death due to extreme weather events, increase in cardiovascular and respiratory disease due to increased air pollution, food and water insecurity due to reduced crop yields, and poor quality water sources resulting from changing weather patterns, mental health impacts from extreme weather events or changing environments as well as their associated social and economic impacts. He emphatically stated that climate change can be stopped by reducing carbon emissions fossil fuel use across energy, transport, food, industry, agriculture and other sectors. There was a need to shift to renewable, green sources solar, wind, water across energy, transport, food, industry, agriculture and other sectors. He ended by saying that if fossil fuels continue to be used at the present pace, the day was not far when the human race will become fossils!

“Air pollution is the greatest external threat to human health globally. It is primarily caused by burning of fossil fuels” said Dr Ken Lee. For decades, scientists have shown that exposure to particulate pollution leads to increased rates of mortality and morbidity. Yet, in many places in the world awareness remains relatively low. There is a need for greater policy actions. He mentioned that the AQLI has been updated with the new data on average PM 2.5 levels in 2019. The aim is to answer the common question: “how bad is the air pollution in your community and what effect does sustained exposure have on your life expectancy?” Satellites provide reliable, geographically extensive pollution coverage, even in places where no ground level monitors exist. Satellite data revealed that South Asia is home to the most polluted countries on earth where PM 2.5 levels have risen by nearly 40% since 2000. Particulate pollution is primarily caused by fossil fuel combustion at the same time, climate change is exacerbating air pollution in many parts of the world. The Air Quality Life Index (AQLI) converts air pollution concentrations into their impacts on life expectancy. AQLI combine satellite data with economics research estimating the causal impact of sustained exposure to pollution on a person’s life expectancy. By combining satellite data and research estimates, the AQLI allows people to zoom into any community in the world and learn how much longer would the average person live if air pollution complied with the WHO guidelines. The life expectancy impact of PM 2.5 exposure is comparable to smoking and is greater than road injuries, poor water and sanitation and other factors. The impact of air-pollution exposure is the greatest in South Asia. Impacts are even greater in the Indo-Gangetic plains – the region faces the most extreme levels of PM 2.5 in the world. Since 2000, PM 2.5 has increased by 36% in South Asia, shortening average life expectancy by 1.7 years. These trends are worsening in places that are not typically associated with extreme air pollution. China’s progress proves that PM 2.5 can be addressed with strong clean air policies. The AQLI illustrates that billions of life-years are at stake. The benefits of clean air policies are likely to vastly exceed the cost of emissions reductions.

Doctors For Clean Air and Climate Action is a network of passionate and committed doctors learning the fight against air pollution and climate change in India. The key objectives of DFCAR are:

Dr. Abdul Majeed Chaudhry bemoaned the uncontrolled population explosion in the South Asian region. Hence, anything and everything done in the form of development becomes disproportionate to the passage of time. The public transport in South Asia is not really ideal, so people have to use their own transport. Delhi, Lahore, Peshawar, Dhaka are places are desperately crowded and that’s one big problem. He felt that as doctors they needed to sensitise respective governments and the people, and make the government and the political elites release that it is a big problem. The SAARC organisation must join hands to curb this pollution in whole of the region.

Dr Kazi S. Bennoor pointed out that many cities are turning into gas chambers because of the increased and low quality vehicles, and that because of unplanned industrialisation, cities are surrounded by many unauthorised constructions and also industrial developments. He said that doctors must to do something about this because in this part of the world doctors are revered next to God. He felt that if doctors come forward it will make a huge difference to the climate action efforts.

Dr Ramesh Chokhani admitted that one of the major contributors of air pollution in Nepal is biomass fuel burning. Even fossil fuels are definitely a contributor to the air pollution but the major chunk of the pollution is due to biomass fuel burning which is mainly from the residential use of wood logs burning for cooking. In many villages people use dry cow dung for burning. All these are important contributors to air-pollution. There are several reasons for air pollution – forest fires are one reason, transport that uses fossil fuels is another important reason; industry too emits a lot of gases is a reason too. One study has shown that in Nepal about 35,000 people die annually due to illnesses caused by air pollution. He felt that people should switch to alternative ways of cooking like use of electric stoves or biogas plants and avoid burning household residues and industrial residues. Wind power to generate electricity, and also solar energy which has a big potential for generation of electricity, need to be promoted.

Dr Nawang Norbu pointed out that while Bhutan has been a carbon-negative state for long, it is rapidly developing, population is growing, and one of the key things is the aspiration of the youth because they are more aligned to global narratives and global trends. He felt that while well-being and prosperity can only be achieved by dependency on material things and that has caused a lot of unhealthy dependence on fossil fuels without realising that because of that we are destroying the very foundation of what makes life possible. In a rather poetic manner he said: “we still have to keep our feet on the earth, drink the water that flows in it and breathe the air which is there. Now is the time to amplify our efforts to strengthen global networks. We must allow our children to have a future where they can breathe.”

Dr Rashna Hazarika is a paediatrician and has seen the effects of air pollution on new-born babies as well.She says: “Nobody in India is a non-smoker because everybody in India is inhaling toxic air which is there in the country. That is the reason we have so many cases of cancer these days. If you look at the kitchen, it is the most badly made area in our house. That is because importance is not given to the ventilation. Especially in rural areas it’s a very closed kind of atmosphere where you are burning wood and the woman who is cooking with the kids sitting next to her – all are inhaling all the smoke during that period of cooking. It is high time we talk about air pollution and the horrible effects of it.”