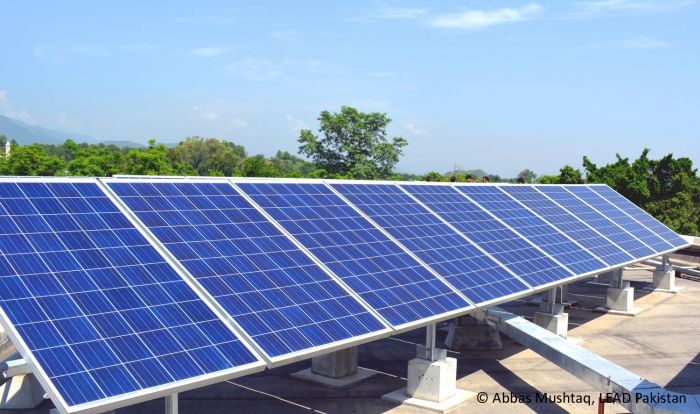 Pakistan’s energy sector is in crisis. Inadequate electricity supplies cost the country US$14 bn annually and some 11,000 small and medium enterprises operate at just 60% of capacity. In 2015, Pakistan’s Ministry of Climate Change and the Punjab Power Development Board asked the Climate and Development Knowledge Network (CDKN) to assess whether a Nationally Appropriate Mitigation Action (NAMA) would be an appropriate tool to support renewable energy solutions for Sialkot in the Punjab, one of Pakistan’s most emblematic industrial hubs of mainly export-oriented industry. For example, the factories of Sialkot supply 40 million footballs a year, rising to 60 million in World Cup years – an estimated 70% of the global production of hand-sewn footballs. The CDKN-led project to assess a Nationally Appropriate Mitigation Action (NAMA) as a policy tool to provide renewable energy to the city’s industrial sector showed that the use of photovoltaic panels for industry could mitigate up to 377,000 tons of carbon dioxide and gain average savings of US$27,400 per year on electricity costs.

Increasing urbanisation in Pakistan is exerting population pressure on the cities. The burgeoning population further limits capacity to utilise existing insufficient public services and infrastructure. This eventually leads to horizontal expansion of cities in the absence of any well-framed laws, and thus further constrains resources, which affect basic human needs and rights such as drinking water.

For example, the water quality has drastically declined in Faisalabad, the industrial hub of Pakistan. A survey-based research study, ‘Access to drinking water in urban Faisalabad: A cautious case for water pricing’ was published by LEAD Pakistan, in collaboration with the International Growth Centre (IGC) and University of Queensland, Australia. The study analyses the household water demand in the rapidly urbanising metropolitan city of Faisalabad. Its findings are based on the survey conducted by aforementioned organisations with a sample size of 1,200 households in Faisalabad.

The findings highlight that about 52 percent of the residents of Faisalabad municipality use unfiltered water for drinking and other household uses. These residents include people living in unplanned settlements particularly, in slum areas. It further reveals that water consumption patterns cannot be changed in Faisalabad through simple water pricing technique. However, it may help generate revenue for local authorities to improve infrastructure and services’ delivery. Click here to download the policy brief.