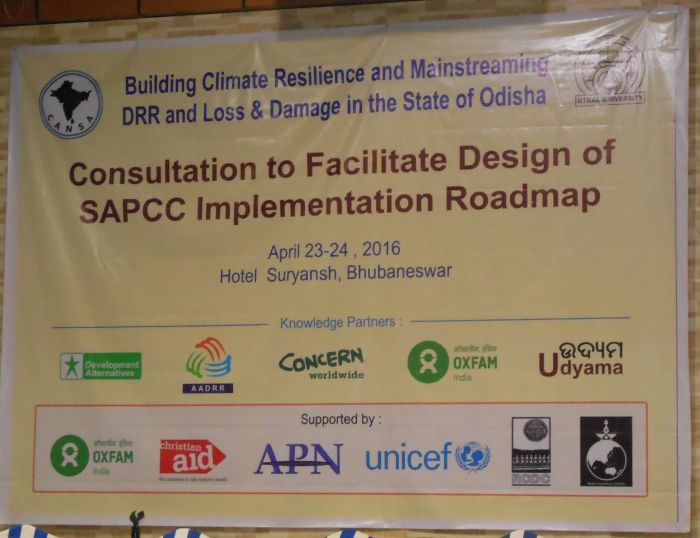 [Odisha, India] – April 23, 2016 – Utkal University, Odisha in partnership with Climate Action Network South Asia (CANSA) will conduct a two-day consultation towards implementation roadmap required to build a climate-resilient Odisha. The consultation will reflect on the way forward for second phase drafting of Odisha State Action Plan on Climate Change (SAPCC) in light of recent global agreements such as Paris Agreement, Sendai Framework for Disaster Risk Reduction, Sustainable Development Goals and SAPCC review study by UNICEF. The consultation will begin on 23rd April and continue till 24th April in Hotel Suryansh, Bhubaneswar and will be attended by state government officials, field experts, academia, research scholars, media and state level CSOs. The consultation will also draw attention to increasingly important loss and damage issue in the state resulting from slow onset disaster events with the purpose to promote integrated developmental planning in Odisha.

Prof. Kabir Mohan Sethy of Utkal University said, ”Odisha is facing extreme weather events affecting the livelihoods of the poor and evidence from the ground needs to guide state policy, to achieve this the Utkal University has decided to set up a Knowledge Centre on Climate Change for Odisha state to support connection of state policy with practice and mainstreaming of climate action through developmental policies”. Sanjay Vashist, Director, Climate Action Network South Asia (CANSA) said, “The signing of Paris Agreement by India yesterday commits all its citizens, institutions, governmental and nongovernmental organisations to join efforts to combat climate change. The need of the day is to assist governments in their efforts to help the poorest of the poor and the most vulnerable to cope and adapt to disasters and slow onset events. As a representative of over 140 civil society organisations, I congratulate Utkal University on its initiative of setting up a Knowledge centre
on Climate Change.”

Odisha counts as one of the poorest states of India as well as one of the most climatevulnerable too. From the 1999 Super Cyclone to the recent cyclones, Phailin and HudHud, in 2013 and 2104, respectively, there is one or the other climate-induced impact/disaster every year such as flood, drought, heat wave, cyclone or a combination of these. With a 480 km of cyclone and storm surge prone coastline of which nearly 10% is in high beach erosion-prone zone, the state is in continuous firing line of disasters. With a largely rural population dependent on agriculture, fishing or tourism, all of which are seeing climate change impacts, the region is high in climate sensitivity.

The Utkal University, established in the year 1943, is the seventeenth oldest University in India popularly known as the Mother University in the Odisha state. There are at present twentyseven Post-Graduate Departments located in the University Campus for Post-Graduate studies
and research in various disciplines of Science, Humanities, Business Administration, Social Science, Law and Commerce. The University has now the jurisdiction over 9 districts, viz, Angul, Cuttack, Dhenkanal, Jajpur, Jagatsinghpur, Kendrapara, Khurda, Nayagarh and Puri and is spread over an area of 24,973 sq. kilometers catering to the needs of higher education of a population of more than 110 lakhs. Climate Action Network South Asia (CANSA) is a coalition of over 140 civil society organisations from eight countries of South Asia. With a vision to strive actively towards the protection of the regional climate in a manner that promotes equity and social justice between the region’s peoples, sustainable development of all communities, and protection of the environment.