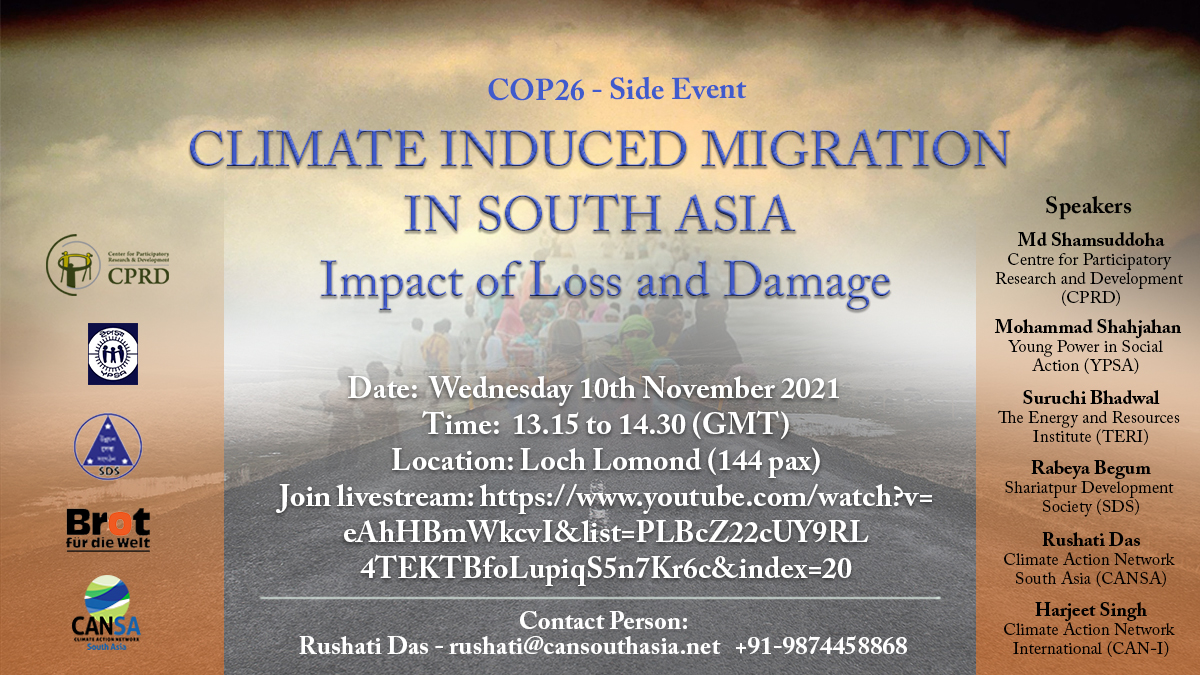 Migration has been a historic, beneficial and important feature of all communities across South Asia. However, when migration is forced and migrants are asset-less, they are often seen as ‘encroachers’ or ‘outsiders’, then it’s a matter of humanitarian crisis. Of late, climate change is impacting the world’s poor adversely, destroying livelihoods and rendering them homeless. This is the situation when average temperatures have already increased by 1.1°C in 2019, compared to pre-industrial levels. A country-level research in five South Asian countries shows that climate change is either directly displacing people or accentuating hardship resulting in distress migration. Rivers eroding banks in Bangladesh, flooding in Pakistan and India, melting glaciers in Nepal, rising seas in India and Bangladesh, periods of unusually dry months followed by heavier-than-normal rains on rice and tea estates in Sri Lanka, or cyclones and inhospitable temperatures across all countries are contributing to climate-induced migration.

Undertaking more ambitious action for meeting the Paris Agreement goals of limiting global warming to between 1.5°C and 2°C warming’, however, will restrict the number of people displaced or driven to move in these five countries, at approximately 22.5 million by 2030 and roughly 34.4 million by 2050 and prevent at least 44.5 million people having to flee their homes by 2050. These numbers do not include counting of those who are likely to be displaced by sudden onset climate disasters such as flooding and cyclones, to which South Asia is particularly vulnerable, and in recent years natural disasters became more frequent like Amphan, Bulbul, Yaas, Nisarga, Tauktae and many more.

According to the 2020 study by McKinsey Global Institute, ‘without strong mitigation and adaptation measures, slow-onset climate impacts could cause countries in South Asia to lose nearly 2% of their GDP by 2050, rising to a loss of nearly 9% by 2100, without counting for losses due to extreme weather events. Other estimates acknowledge that people living in poverty will be hardest hit by climate hazards, and countries in South Asia could see 7 to 13% of their GDP at risk every year by 2050’. Strong mitigation actions combined with increased resilience, increased finance flow and through decent green work, social protection and disaster risk reduction can reduce the numbers. These numbers do no justice to the individual stories of loss and devastation that follow displacement and distress migration. Millions of people will continue to be displaced regardless of climate action.

Undertaking more ambitious action for meeting the Paris Agreement goals of limiting global warming to between 1.5°C and 2°C warming’, however, will restrict the number of people displaced or driven to move in these five countries, at approximately 22.5 million by 2030 and roughly 34.4 million by 2050. Data on cross-border migration may not be as robust as the data on internal migration and displacement, however, one would imagine the challenges faced by migrants forced to cross borders to be much bigger. Victims of forced, undocumented migration often do not benefit from any legal or social protection at their destinations. They are most often in a situation of ‘illegality’ outside the domain of national law and are extremely vulnerable. People are subject to exploitation and human rights abuse when they are forced to migrate to a new destination, especially when it is across the border. Their dignity and their ‘right to life’ are threatened.

Without systematic records detailing such displacement, the true extent of the phenomenon remains ambiguous. They are usually invisible in the eyes of the State (except for immigration enforcement apparatuses, which often pose a direct threat to their lives and livelihoods) and lack access to the resources necessary for their survival. This results in violation of internationally guaranteed human rights.

CANSA’s country level research produced 5 reports as evidence of climate induced migration but only reporting will not help the people on the ground unless we take serious charge on actions. The technical session explores the way forward with respect to policy drivers and means of implementations like finance, to address the following: