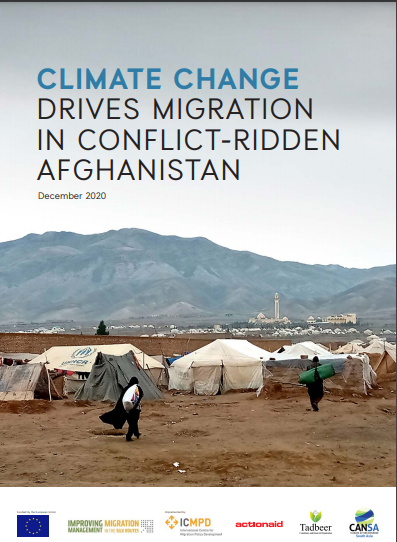 The climate change predictions for Afghanistan reveal an increase in temperature that will dramatically impact the country’s agricultural production, water availability, and food security. Increased temperature, earlier snowmelt, and lower precipitation lead to large population movements, including out-migration and significant internal displacement. Climate-induced migration usually does not get the attention it deserves in Afghanistan. Even in the context of climate-induced migration, most of the attention is focused on displacement that results from rapid-onset natural disasters, such as floods. Less attention is paid to migration resulting from a changing climate’s long-term implications, such as lower agricultural productivity. The combination of conflicts and natural disasters has resulted in the population suffering from high levels of poverty and vulnerability. As the conflict endures, economic growth is constrained, and political instability further undermines the country’s development.

The “CLIMATE CHANGE DRIVES MIGRATION IN CONFLICT-RIDDEN AFGHANISTAN” report attempts to provide context to and understanding of migration in Afghanistan to show the link between climate change and migration. Using participatory research with communities in Afghanistan and combining it with policy analysis, the report captures a picture of internal migration and displacement in Afghanistan due to climate change related factors. Afghanistan lacks a well-resourced and broad national development programme to address climate change impacts and prepare for future challenges. Though the country has several policies for migration, disaster response, and the environment, the link between climate change and migration is not well-established. Displacement is primarily recognised as due to insecurity and violence. This study recommends vital policy measures that can contribute to an overall regulatory framework, specifically addressing climate-induced migration.