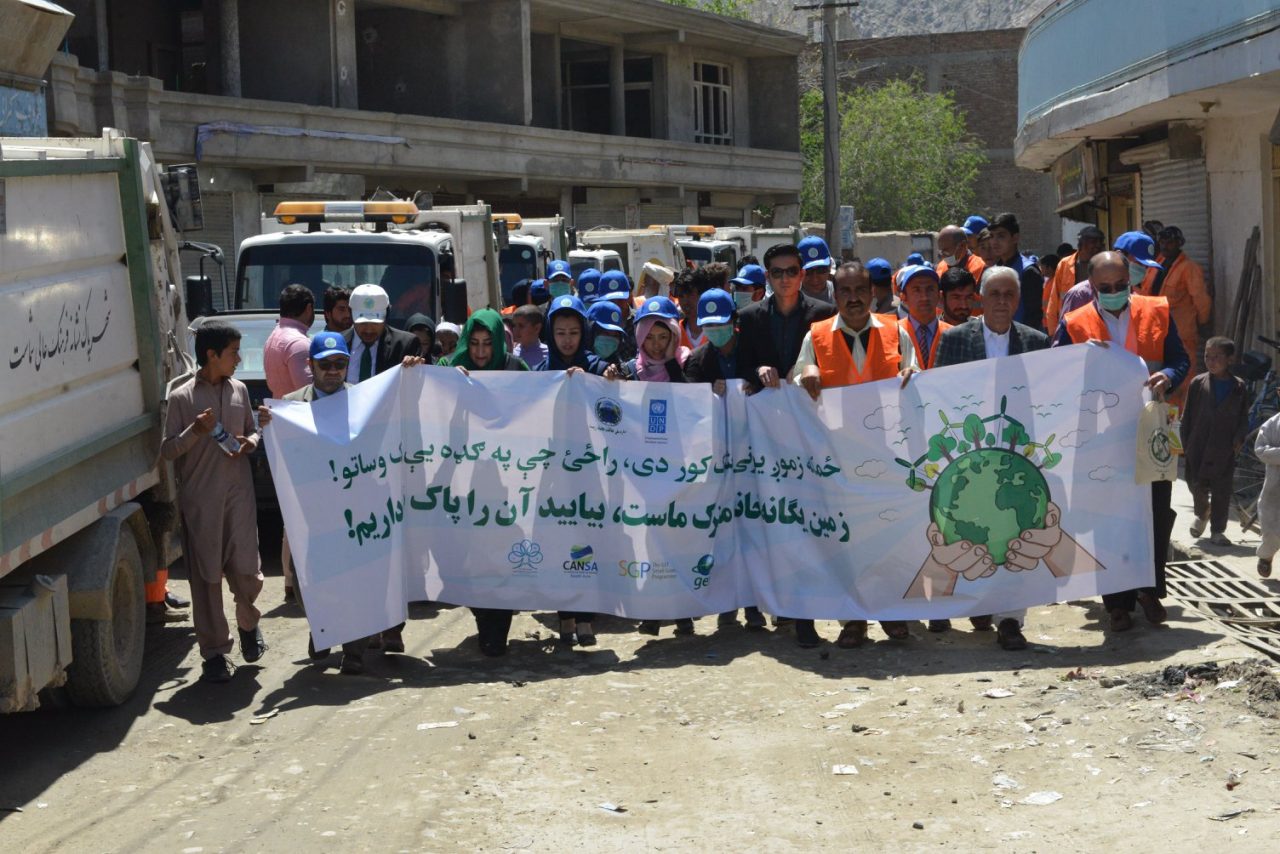 CANSA Afghanistan and ENRMN consist of environmentally focused civil society organisations, NGOs, especially grantees of the Small Grant Programmes (SGP) of the Global Environment Facility (GEF), which is led and implemented by United Nations Development Program (UNDP) in Afghanistan since 2012.

Afghanistan Young Greens (AYG), the appointed secretariat for ENRMN and one of the key players of Earth Day Celebrations in Kabul would like to express its thanks to SGP, GEF and UNDP for their financial support to grantees and for the Earth Day programme. Besides their financial assistance for the event, UNDP, SGP and GEF have effectively enabled CSOs and NGOs to address and advocate for the environmental issues in Afghanistan since 2012 and enabled an innovative celebration such as Earth Day, led by CSOs to take place there by helping CSOs in 2018 to help better write their success story of capacity development.

The theme for Earth Day in 2018 was, “End Plastic Pollution” that was also the basis of which the Earth Day was celebrated in Kol-e-Hashmat with the following specific objectives:

The celebration had three agenda points as following:

Achievements and the quick outcomes of the event:

The uniqueness and innovativeness of this event was its location, since for the first time an event of the Earth Day celebration was conducted in a Madrasa3/ Masjid. In 2017 AYG was granted financial support by GEF-SGP/UNDP to implement the “Community Based Wetland Conservation (CBWC)” at KHK, during the last one year AYG worked and sensitized the community members of KHK about the environmental issues, and now they have a positive perception of cooperating to address their social as well as environmental issues with policy and decision makers through peaceful manners.

More than 200 people including 20% women participants had participated in the event. The participants of the event included from different categories, i.e. government officials, and representatives of local CSOs, international organizations, university students, school teachers, community members and religious leaders who have been actively participated during all activities of the event, particularly, the religious leaders have very much cooperated and contributed in organization of the event.

The speakers of event were:

This event facilitated the community members an opportunity to face with government officials to advocate, address and share their social issues, wastes problems at KHK and other community challenges. Consequently, Mr. Ghiasi Director of Sanitation Services of Kabul Municipality committed that the KM will “install 200 waste bins and appointing sufficient waste collection trucks in the area during the next two months”. But, he also emphasized and requested the cooperation of community members and households in proper management of their wastes by taking waste separating actions and proper use of waste bins.

He also shared the concerns and recommendations of CSOs with government officials which were:

Once again the leadership of AYG would like to express its thanks to UNDP, GEF and SGP for its financial support of the event and enabling civil society organizations to address the issues of climate change and to raise their joint voice for protection of the environment in Afghanistan.

We also thank all the civil society organizations, especially SGP grantees, CANSA members, ENRMN members, community members, government officials, especially the police and the youth groups, who actively participated in the event and made it successful.

The photo credits of this event goes to AYG and its professional photographer Mr. Abulfazl Warasta, who proved to be professional capturing extra-ordinary photos of the event and the KHK’s wetland.

More pictures from the event can be found on Facebook over here.

1 ENRMN is a network of all environmental and natural resources focused civil society organizations and individual activist which was founded in 2012. Currently this network is led by Afghanistan Young Greens (AYG).

4 The Kol-e-Hashmat Khan Community Council (KHKCC) was established in 2017 by AYG as part of its CBWC project funded by GEF-SGP/UNDP.