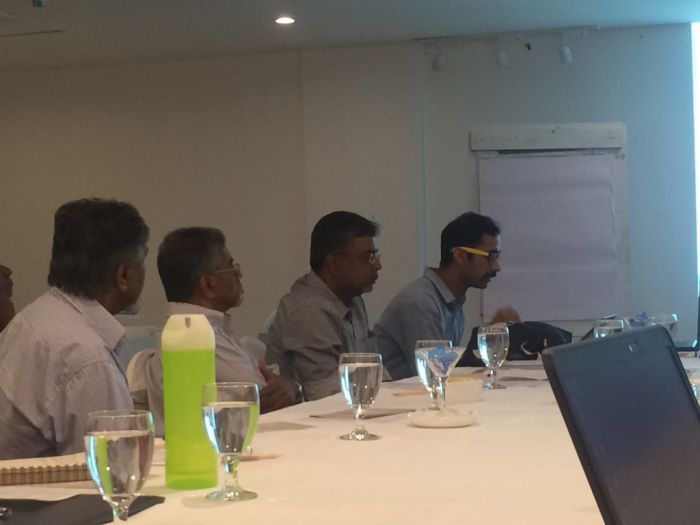 The regional knowledge sharing workshop organised by Climate Action Network South Asia in collaboration with project partners Janathakshan, Development Alternatives, IDEA, CAN International, INFORSE and All India Women’s Congress that sought to discuss “Pro-poor Low Carbon Development Strategies” was conducted in Sri Lanka on March 31, 2016 in Colombo. The topic of discussions included the need for regional co-operation among the eight countries, the responsibilities of CSOs and NGOs towards pro-poor low carbon development, the basic definition of what constitutes as pro-poor low carbon development and the need to incorporate such practices in both national and regional development agendas.

Speaking on low carbon development in his country, CANSA Programme Manager – India, Anoop Poonia said, “The metro is considered a pro-poor option in India for those who cannot afford private transportation and there is a slow but gradual shift in technology towards solar and other options in the renewables sector. While the Government does think of pro-poor it also has a mandate aligned with industries that require to fulfil its mandates towards the country’s GDP.”

Simultaneously reiterating his opinions was Navam Niles from Janathakshan, Sri Lanka who said, “One of the key concerns in Sri Lanka right now is food security and how we as a country can balance environmental sustainability with economic security.” Niles also went on to say that Sri Lanka was in fact at a critical juncture when it came to low carbon development.

Responsibilty as Representatives from the Development Sector

Speaking on the standing of NGOs and CSOs in the region was former CANSA Board Member and Strategic Enterprise Management Agency Chairman Asoka Abeygunawardana explained the role of NGOs and CSOs in pro-poor low carbon development. He remarked on how the development sector is on a better place to do work in such development and the discussion ought to shift from it being an solution as opposed to an option, especially in the fossil-fuel heavy economy we presently dwell in.

“When it comes to the topic of adaptation and mitigation, it’s not something we can discuss in isolation any longer but something climate change preventive measures that should incorporate both adaptation and mitigation initiatives. It’s also important to discuss ‘development’ as an integrated approach, as it is not as though we would have separate development scenarios for the rich and the poor, while at the same time we have with us a responsibility to protect the poor,” said Abeygunawardana.

The discussion was a participatory one that brought together differing but similar opinions of low carbon practitioners and the need to integrate more regional discussion.