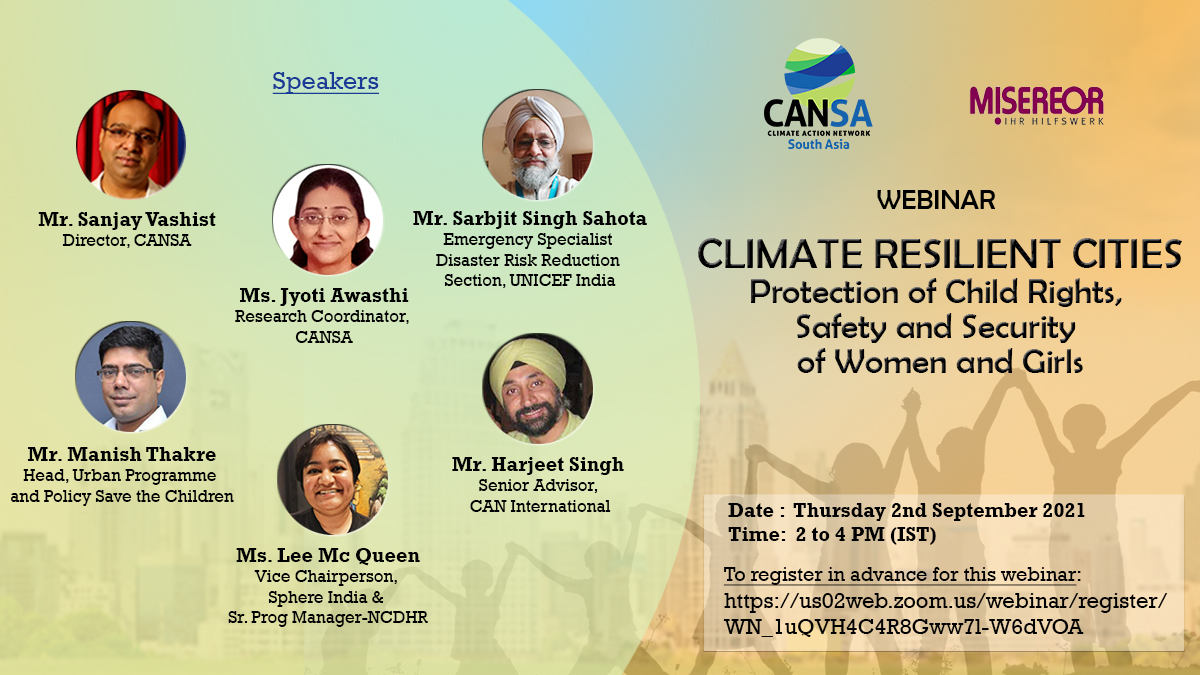 This webinar addresses the protection of child rights, safety and security of women and girls, which has always been a matter of concern in urban climate resilience planning. Due to inundation, water logging and physical damage to school buildings, children are unable to attend school, they drop out of school and join their parents to work in order to augment their family income and compensate for the crisis/ disaster, and the resulting food insecurity among children (esp. those who go to government schools and avail the facility of mid-day meal) will result in malnutrition and morbidity. The same is true when the family slips into further poverty due to impacts of climate change, poverty, destruction and assetlessness, which pushes children into mental trauma and low self-esteem, early marriage of girls due to inability to send them to schools and feed them properly, long term health impacts an societal impact catered by high degree of migration of mostly male parents – all this has been a long-standing challenge for urban poor. This webinar is an attempt to address this.

Harjeet Singh referred to the recent IPCC report’s verdict on climate change, saying there has been a clear connect between climate science and climate policy making. This report becomes paramount in policy-making processes and must be referred to in both policies and practices. This report has made a huge leap in terms of its analysis of the data it has provided and the direction it is setting for the policy-making process. This report makes a very strong connection between how we are polluting the environment by putting more carbon dioxide into the atmosphere and how it is leading to warming. So, there is no doubt that this report now very clearly establishes that human beings are responsible for this global warming. The conclusion they put forward is quite a determining factor where we can’t just refer to it as a natural phenomenon. So far climate science has been much more at the global level, a little bit at a regional level. As science progresses, it helps us understand climate a little more. These regional level predictions are important for us in our action planning and in responding to the specific challenges we face in the South Asian context.

Jyoti Awasthi said that the urban and climate communities need to come together. More and more people from rural areas are moving into urban centres that are hotspots of economy, i.e., the metro cities in big numbers. But the question is are the cities ready to accept them? It is important to consider them because climate impacts are not felt only in the drought areas or the hills. They are equally felt in urban areas. The recent rainfall in Delhi was 1500 per cent more than it should have been in a single day. With the amount of flooding that Delhi saw yesterday, where would the urban poor have gone at that time? What could have done in their situation, their dwelling, their children, their belongings, their livelihood opportunities? What happened to that, have they come back to the normal lives? No. Because nobody thinks about them. Urban poor comprises people who don’t have assets in the cities, they don’t have any fallback mechanism. They are those people for whom the system is not working, people were not identified by the government and among them there are children who are living in poverty, don’t have an adequate place to live in. Women are the worst hit – they can’t go to work to earn, they are the ones who really manage the house, they have to handle their children’s problems and the kind of poverty that they again fall into; women have to do a lot of compromises. There is a need to bring climate community and urban community together and there has to be a lot of cross learning where urban poor are seen as victims of climate change.

Sarbjit Singh Sahota started by talking about the problems faced by the urban poor. The climate crisis poses a major threat to children, their health, nutrition, education, development, their very survival and future potential, especially the most vulnerable. Already, climate change and environmental degradation are threatening children’s access to safe water. Water scarcity limits both the amount and quality of water for children, and when children do not have access to safe water, it puts their health, nutrition, education and future at risk. We have seen children and young people unite in a call for action. However, many governments have not adequately listened or responded to the demands. He mentioned that the climate crisis is a child rights crisis. Water insecurity is a child rights crisis however, at present, neither is recognised as such. Necessary action is not being taken. He referred to the Children’s Climate Risk Index. The CCRI utilises data to generate new global evidence on how many children are currently exposed to climate and environmental hazards, shocks and stresses. The CCRI is a composite index that analyses exposure to climate and environmental hazards, shocks and child vulnerability based on the availability, quality, equity and sustainability of essential services for children such as water and sanitation, healthcare and education. Approximately 1 billion children living in 33 countries are at an ‘extreme high risk’ from the impacts of climate change. The 33 extremely high-risk countries contribute the least to the cause of climate change. The top 10 contribute approximately 0.5% of global greenhouse gas emission. There is a lot we can do to improve outcomes for children, including investing in improving access to key social services.

Lee Mc Queen started by saying that when we talk about climate justice it clearly is about a human rights-based approach. It took us a long time to realise and acknowledge openly the disasters impact everyone differently. When we talk about climate mitigation and adaptation it is important to know what kind of policy framework will be followed for example if you look at the action plan for climate change. India it is focusing mostly on science, about reducing the emissions. It is important to study and understand the impact of climate change and the climate-induced events on different social groups different vulnerable groups, inform the policymakers to come up with the studies and recommendations which are going to actually resolve some of those issues. The moment we group everyone into one category as a poor community it’s not going to resolve the issue. There has to be disaggregated database that is extremely important. She concluded by saying whatever policy documents we have right now we do need to advocate and demand a robust policy framework. These are some important aspects which the climate action network and the climate action policy and programmes need to take care of and consider them. Broadly speaking the focus on more protection aspects of women, children and marginalised groups needs to be advocated.

Manish Thakre said the voices of the children need to be heard and taken into consideration, so that we have a good urban resilience plan. When we talk about resilience we talk about shocks and stresses which could be due to natural hazards or human hazards as in the COVID-19 crisis scenario. In Kolkata, Patna and Delhi Save The Children continues with their resilience interventions in the cities. They prepare area risk profile and disaster management plan and based on these plans we then provide a direction of coordination with different stakeholders on different adoption vulnerability regions and capacity building to minimise the loss of life and property. He stated that family level preparedness and survival kit is important as by developing a family emergency plan and assembling a disaster supplies kit it can help to ensure family safety when the unthinkable happens. Before creating a household emergency plan, they learn about the types of emergencies that may affect them or their community and how will they be notified when an event occurs and what plans are already in place to deal with such events. Disaster management and preparedness plans or climate action plans have to be informed by the number of children and their vulnerable situation and strategy to address their specific needs. He concluded by saying that it is very important to have an urban planning discussion or some complement chapters so that children understand what urban planning is. It is our responsibility to make sure that children should be made part of the planning and even monitoring because if children monitors they bring out different things and give new ideas, he said.

Recording of the webinar link: