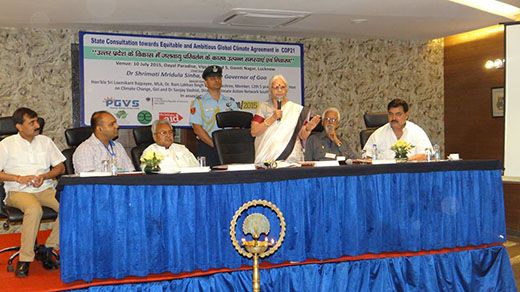 India is looked at as a key country in the process to achieve a fair, ambitious, equitable and comprehensive Climate agreement in COP21 at Paris in Dec 2015. The domestic developmental needs and aspirations shall drive the national policies and international positions of India on climate change. State consultations are crucial to shape positions for India’s INDC on development issues impacted by climate variability. With a series of state consultations planned in next few months, the process was initiated from Uttar Pradesh.State Profile Uttar Pradesh (UP) is India’s most populous state (200 million) and contributes 6% of the nation’s Gross Domestic Product (GDP) even though its economic growth rate has been below the national average since 1960. The state agriculture sector accounts for over 40% of UP’s economic output contributing 20% to India’s foodgrain basket, thus, having high strategic importance to India’s food security. UP as a state elects highest number (80) of parliamentarians to national legislature (Lok Sabha).

Climate Vulnerability & GHG Emissions of UP

The state has over a period of last 20 years experienced increasing frequency of flash floods in small rivers, increasing duration of water-logging, dry spells during the monsoon, untimely sudden downpours in non-rainy season thus impacting economy and people. The per capita GHG emissions are below the national average even though it is highest GHG emitting state of India (15%) coming mostly from increasing petroleum consumption, coal power plants, 7 SME industry clusters & diesel pump-sets for agriculture.

UP Consultation Proceedings and Outcomes

Dr Laxmi Kant Bajpai laid out possibilities of development with protection of environment through examples of developed countries using wind and other decentralized renewable energy while effectively managing limited resources. He assured the audience of raising the issue in state legislature. Later Mr Sushil Khanna, MLA also joined asserting afforestation and all dignitaries present listened to the various deliberations and recommendations made in the consultation towards India’s policy positions and INDC.

The consultation recognised that :