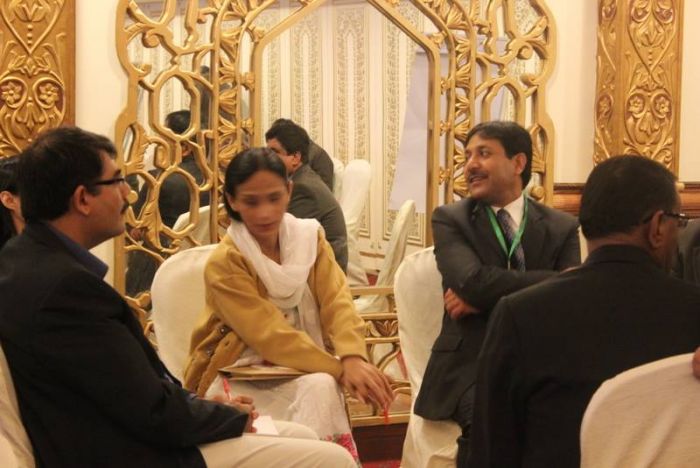 Pakistan, Islamabad, December 18, 2013 – Members of Parliaments of South Asian states and representatives of national and regionalCivil Society Organisations (CSOs) of South Asia, attending the sub-regional conference‘South AsianParliamentarians and Policy Makers at Work: Putting Climate Adaptation, Food Security andPopulation Dynamics back in the Agenda’ organised in Islamabad, Pakistan on 16-18 December2013, concerned about the threats of climate change, have put together a declaration which expresses their commitment to work towards collaboration on finding solutions to issues faced by the populations of South Asia.

They reiterated the ‘Call for Action from the South Asian parliamentarian Workshop on Climate Change adopted on 4 April 2012 in Nepal, on the eve of ‘International Conference of Mountain Countries on Climate Change’.

The Declaration recognises climate change as the biggest ever threat to a ‘safe operating space for humanity’. For protecting the future of humanity, in one hand, a global collective initiative is the most crucial necessity; on the other hand, we understand, the discourse and elements of national security needs to be redefined considering human and civilian components leading amongst climate change, inequality and cyber security.”

In addition the Declaration recognises poverty to be the biggest threat to national security. “Anthropogenic climate change is causing harm mostly to those who are poor, marginalised and excluded. Furthermore, we acknowledge that sea level rise and weather related extreme and slow onset events will impact the food production negatively.”

“In the context of climate change radical changes in population distribution and rapid urbanisation, it is important that South Asian governments initiate Agro Ecological Zones (AEZ) and specific adaptation measures at local, national and regional levels with a particular emphasis on agriculture for ensuring food security for all.

“Consequently, we urge South Asian states to come together for ensuring water security for communities of the region while at a national level community based water resource management and at national/basin level integrated water resource management will be prioritised.Moreover, we urge South Asian governments to recognise community ownership and their customary rights on common property resources. We call for an immediate end of land and water grabbing by powerful individuals and companies in the region.”

We, in the context of a plausible radical change in population distribution caused by the impact of climate change, urge South Asian governments to take measures to enhance understanding on climate forced displacement, migration, planned relocation and rehabilitation at national, regional and international levels, and negotiate for devising appropriate policy and programme at national,regional and international level to support the innocent victims of climate change. We urge SouthAsian governments to radically rearrange the social protection programmes and devise national multi-sector strategy to address the issue of forced displacement, migration, planned relocation and rehabilitation, while at multilateral level explore the opportunities under Cancun AdaptationFramework and Doha decision on Loss and Damage.

We urge developed and major emitting countries to reduce their emissions of greenhouse gases following the UNFCCC principle of Common But Differentiated Responsibilities and Respective Capabilities (CBDRRC). We urge developed countries and major emitting countries to immediately increase their ambition for emission reduction and reach a legally binding agreement in Paris in 2015to be implemented from 2020.

We appreciate South Asian governments for adopting the Dhaka Declaration (2005) from theThirteenth SAARC Summit and Thimphu Silver Jubilee Declaration (2010) from the Sixteenth SAARCSummit for combating climate change. However, we are deeply concerned with the progress ofimplementation. We hope the South Asian leaders will consider the ‘implementation’ issue as a keypriority in the next SAARC Summit.

We are happy to announce that the Members of Parliaments of South Asian states andrepresentatives of national and regional CSOs of South Asia will be collaborating each other acrossthe region in coming years for enhancing our understanding on climate change challenges,strengthening capacity on adaptation and mitigation efforts and for generating policyrecommendations for national, regional and global policy measures.