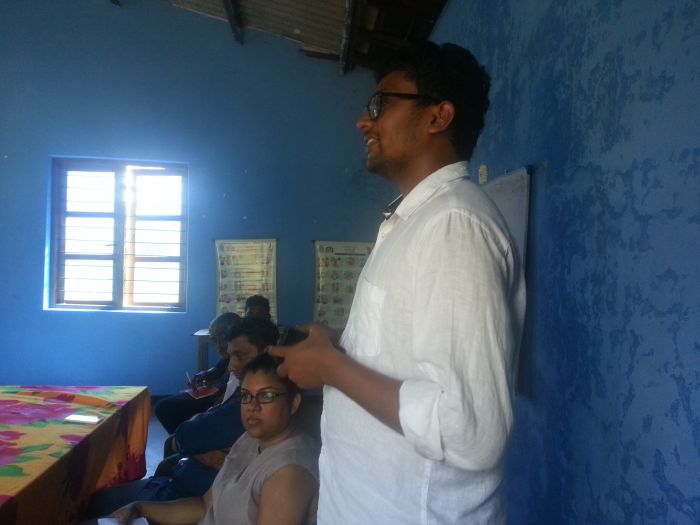 Capacity building workshops for farmers of the Trincomalee district on climate change adaptation for agriculture, through the implementation of toxin free, organic farming and crop diversification was held 23rd March, 2016, in Padavishripura and Morawewa. The workshops were organised by SLYCAN Trust in partnership with the Nagenahiru Development Society as part of a programme to educate the farmers on the impacts of climate change to the agricultural sector, and how adapting to the impacts through crop diversified farming.

Speaking at the event, Eastern Province Provincial Council Member Mr. Priyantha Pathirana said, “It is important that farmers understand the impacts of climate change and the need for adapting to them in the simplistic form. It is a day to day reality, and we experience in real life. It is important that farmer communities are educated on how to adapt, and how agriculture could be adapted to minimise the impacts of climate change to the agriculture sector.”

He further elaborated on the need to empower communities to stand up on their own, and not to be living with a dependency based mindset. He added that communities which are poor could develop economically if there was the correct mindset, and the build capacity to empower them in their decision making.

Shifting from Toxin Based to Organic Farming

Programme Co-ordinator for SLYCAN Trust Mr. Kavindu Ediriweera, the implementing entity of the project expressed his view on the implementation of the project. He said, “It is important for farmers to understand that there is an alternate option to chemical fertilizer based farming. Many do not turn to organic and toxin free agriculture mainly because they do not have the sufficient technical knowledge to implement it. The workshops are designed to address this need, and to encourage farmers to move towards organic and crop diversified farming.”

“When SLYCAN Trust was planning actions to address the need to build the capacity of farmers to adapt to adverse impacts of climate change, the government policy on toxin free agriculture was also introduced. We are extremely happy that this policy was introduced, it shows that the policy makers are taking conscious decisions to address the adverse impacts on agriculture, as well as people’s health.”

Policy and Advocacy Coordinator of Climate Action Network South Asia, Ms. Vositha Wijenayake explained, “Carbon dioxide produced primarily as a result of burning fossil fuels is considered the most dominant single source of greenhouse gas emission. But harmful impacts of nitrogen dioxide released to the atmosphere is not paid the same attention. Even though the concentration of nitrous oxide in the atmosphere is considerably lower than that of carbon dioxide, the global warming potential of nitrous oxide is considered as being over 300 times greater than CO2. .Chemical fertilized used in farming is one of the main contributors to the emission of N2O to the atmosphere. In shifting to toxin free agriculture, we are helping reduce the harmful emissions contributing to global temperature increase.”

She also added that through the introduction of crop diversification the farmers will be able to increase their income as well as reduce the risk of economic impacts due to adverse impacts of climate change which harm their crops. “When you base your income on one crop such as paddy, when there are impacts such as floods and droughts the farmers are highly vulnerable to crop damage. However if there is crop diversified climate adaptive farming, the risk of not having any income for that season is reduced, and resilience is built.”

According to the United Nations Food and Agriculture Organisation states the intersection between climate change and agriculture is crucial in order to understand the role agriculture plays in contributing to and mitigating global warming. Further, the role of organic agriculture and methods such as diversifying crop production, has been widely recognized  internationally for its potential to help farmers adjust to climate change. The programme which was launched is an effort to implement similar initiatives at the local and national level to adapt to climate change, and develop the economic standard of farmers of rural Sri Lanka.

Rumal is a LLB graduate and is completing her postgraduate studies in International Relations. She is interested in sustainable development, climate change, animal welfare, forced migration and human security, and she write regularly on the same for SLYCAN.