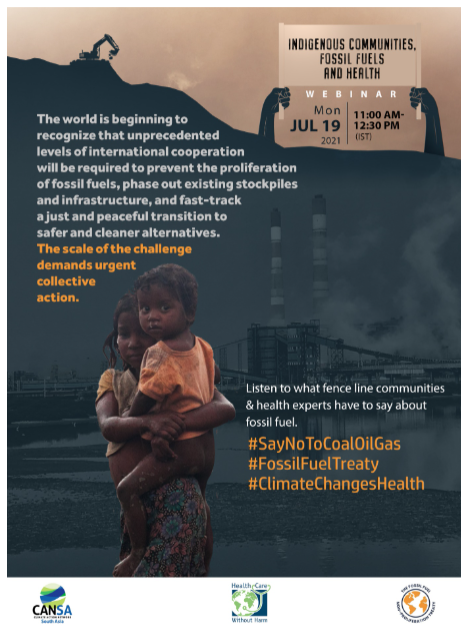 Over 30 groups representing those impacted by coal, oil and gas exploration and production from the 4 states of India, West Bengal, Tamil Nadu, Jharkhand and Chhattisgarh, on Monday joined millions across the world in calling for a Fossil Fuel treaty to say no to coal, oil and gas, and a just transition.

The endorsements for Fossil Fuel Treaty by these community groups representing the voices of those who are worse affected and least heard, were announced at a webinar ‘Indigenous Communities, Fossil Fuel and Health – Time for A Fossil Fuel Non-Proliferation Treaty’ jointly organized by Climate Action Network South Asia (CANSA) and Healthcare Without Harm on 19 July 2021.

Sanjay Vashist, Director of CANSA opened the webinar with reference to the recent flash floods, cyclones and the pandemic, “these disasters have affected all humanity across all classes, including those who have been the cause of the problem. Fossil fuel use has become a weapon of mass destruction. While coal was a cheaper source of energy in the past, we have no excuses now with an alternative viable source. Renewable energy supports and also ensures growth on social and environmental parameters; it ensures climate justice and equity. It is time we embrace it.”

‘Tis an ill wind that blows no one any good – goes the proverb. And when the women living in the vicinity of the collieries of Raniganj talk of the incessant smoke from the coal fired power plants leaving a black haze in the air, a strange taste in the water and even the fish they eat, they see this as the ill wind. This is what those living in the coal mining regions of the Deucha-Pachami area of West Bengal live through daily – terrible skin problems, lung and joints issues, abdominal pain, painful periods and failed pregnancies in women.   And it’s only the tip of the iceberg. Subha Protim Roy Chowdhury of An Assemblage of Movement Research and Appraisal (AAMRA), West Bengal, says that 80% villagers have been displaced from their home due to the coal mines.

Dr Poornima Prabhakaran, Deputy Director, Center for Environmental Health, Public Health Foundation of India, declared that “the climate crisis is a health crisis – the science and evidence are out there. With India being host to 15 of 20 most polluted cities in the world, it is highly vulnerable to a bouquet of climate related diseases. And to prepare for this requires capacity. The world recognises that there is a disease burden from a changing climate. There is clear evidence that deteriorating air quality and high SPF – affect not just lungs but overall physical health. Everyone knows what an unprepared health system means to the country due to the pandemic. We need to act together and we need to bring health at the centre of the discourse on energy policy. We need to look at this through the health lens and it is important to do that now.”

Rinchin, writer and social activist from Chattisgarh. “When we talk about transition to cleaner energy, the core issue will be – Who is owning those resources? Who decides how the local communities are involved? They are left alienated from their own resources. Everything that comes in the name of development, actually comes at a heavy cost to the local communities. When we talk of transition, so many things need to be looked at – workers’ rights, working conditions; will it be just, equitable for the marginalised communities? We need to look at what workers are getting right now.”

G Sundarrajan of Poovulagin Nanbargal, Tamil Nadu, says the livelihoods of local fishermen in Ennore-Pulicat have been destroyed. The Ennore estuary, known for its rich brackish water, and part of the wetlands of the Pulicat Lake, has sustained generations of fisherfolk, and supported a rich and diverse ecology. With massive thermal power plants constructed here, ash ponds, and two ports handling coal, the environment and livelihoods associated with the wetlands have been severely impacted. Coal ash from thermal power plants in Ennore has turned white prawns in the Ennore River into ash prawns. Fisherfolk from communities around the thermal power cluster say this has decimated local markets, with no customers buying fish caught from Ennore.

Tasneem Essop, Executive Director, Climate Action Network – International, in her closing remarks, reiterated the need for a just transition away from fossil fuel dependency. “We must decide who controls a just transition – it’s a process that starts out with those who are most affected, most vulnerable, and marginalized, and especially those who bear the brunt of our present fossil fuel addiction; without these there can be no justice”, she said.

Link to the Webinar recording : https://we.tl/t-UBZWqjykOv

Link to the Film launched at the webinar : https://cansouthasia.net/wp-content/uploads/2021/07/THE-FINAL-FOSSIL-FUEL-STORY.compressed.mp4

Link to endorse the treaty : https://cansouthasia.net/endorse-ffnpt/