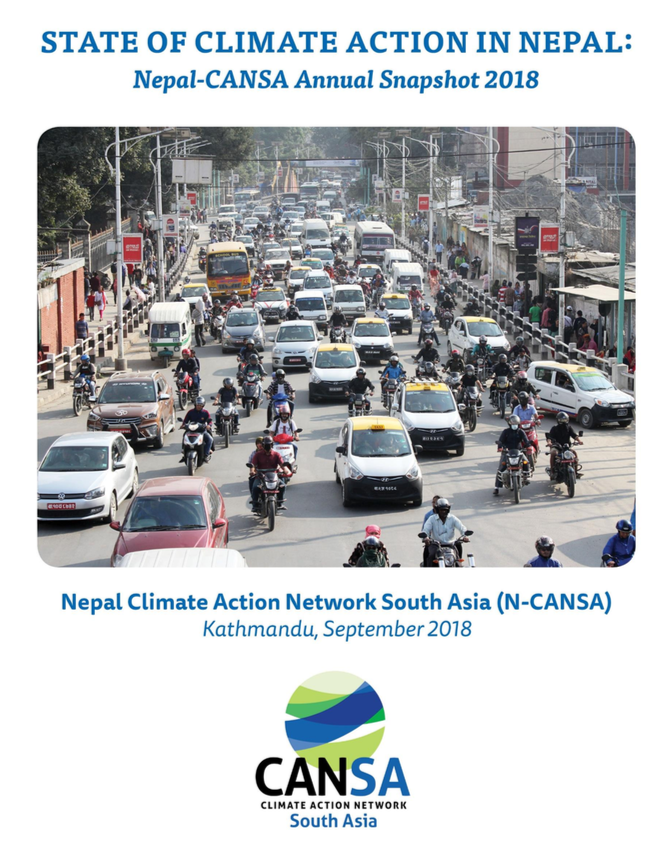 State of Climate Action in Nepal

Climate Action Network South Asia (CANSA) held its annual general assembly on July 2017 in Nagarkot, Kathmandu. One of the concerns expressed at the meeting was that, while there were plenty of climate change related activities and projects, there was a relative weakness in climate activism – which is the primary driver capable of pushing a lethargic or reluctant policy milieu in the direction of renewable and sustainable future. This was especially worrying because, despite the many projects and activities by national and international agencies, academia and NGOs, countries were sliding towards a reverse, non-renewable path of more fossil fuel dependence. This was as true of the Global North as the Global South, and more so in South Asia which, not being a fossil fuel rich region, had more to lose economically and strategically if it did not reduce its debilitating dependence on fossil fuel.

A concept note was subsequently circulated to all CANSA focal points in end July that described the basic motivation and idea behind this exercise of producing an Annual State of Climate Action in South Asia report. It was to be an ambitious but preliminary first step towards a CANSA version of an IPCC report but through the lens of South Asian national civic movements, whose motivation stems not from a desire for business profit nor for control and management of their respective societies but from a moral commitment to the cause of a sustainable and renewable future. It was meant to assess what actions governments, businesses and civic organizations have taken or not taken during the year on climate change mitigation and adaptation, and to provide early warning signals if things were moving too slowly or in the wrong direction. Such an exercise was felt to be necessary not only to prod our officialdom onto a more dynamic climate-friendly path but also to give better context to our own research and implementation activities which would otherwise be in danger of missing the forest of higher goals and issues for the day-to-day trees of specific projects.

Nepal chapter of CANSA (N-CANSA) decided to set the ball rolling and to move ahead with preparing the Nepal report. It is said that no constitution is ever made perfect since nothing is, even humanity as per Emanuel Kant’s famous saying, “Out of the crooked timber of humanity, nothing straight was ever made”: it is constantly perfected through the democratic process over years and generations with goodwill and effort of people true to the original vision. The same should be said of this report: it is the first attempt of its kind and will be perfected every following year. This report does not claim to be comprehensive: there are important areas that need more in-depth examination such as changing household energy consumption; solar (both photovoltaic and water heating); energy efficiency; energy (with water) footprint studies; nexus between water-energy-food-climate change, etc. Even the topics that we have managed to examine in this report have much room for deepening and expanding in coverage. Our modest hope is that this first-time effort will serve as a template for voicing our collective civic concerns.

What we hope for is that more people concerned with climate change and sustainable renewable development will join this network and contribute to broadening, deepening and constantly perfecting the report in the coming years. We have received enthusiastic support of N-CANSA members as well as those within our respective networks and we thank all of them. We must, however, mention that this effort has been entirely voluntary: not a cent/paisa was taken from any donor or grant-giving agency, national or foreign. This is not to say that we will not need to raise funds for this effort in the years to come, especially for printing and dissemination as well as for being able to pay for bare sustenance and travel of younger researchers and interns. However, that is for the future and will depend on how the network for this exercise expands beyond the small team that prepared this first snapshot report, a process which we hope will start from the very day of its release.

We eagerly await your response, suggestions and future participation in this effort of ours to push Nepal (and indeed all South Asia) away from fossil fuel addiction and towards a much more resilient and sustainable renewable future.